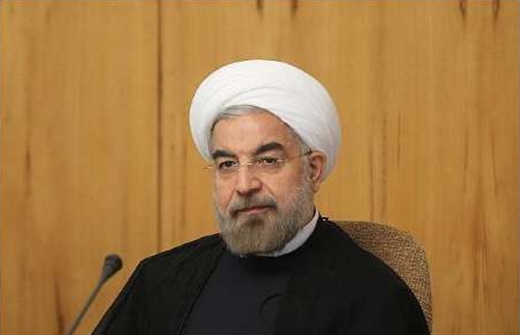 Iranian President fired back at Netanyahu for his attempts to sabotage talks between Iran and P5+1.

President Hassan Rouhani has said that if talks are designed to make things more transparent, Tehran will sit at the negotiating table, but that his government would not accept any deal meant to deprive the Iranian nation of their absolute right to scientific and technological progress.

Speaking in a meeting of his Cabinet Wednesday – in reaction to Israeli prime minister’s comments on Capitol Hill a day before – the president said we seek a deal that serves our national interests as well as those of the region and the wider world.

The world approves of progress in talks between Iran and P5+1 because such progress serves the commercial, economic and cultural interests of the region and the entire world as it helps settle the problems that have given rise to extremism around the globe, he said, adding, only one aggressive and occupying regime which sees its survival guaranteed in war and aggression is mad at the talks.

The president further said the Zionist regime has always been worried about the prospects of peace and stability in the region. “The al-Nusra Front, which is a terrorist grouping [operating in Syria] has the support of this regime. Those who want to see the region and the entire world become a better place should know that the path to regional development and progress goes through stability and security and that talks are the only way to settle the dispute over Iran’s nuclear program.”

“Such comments won’t leave an impact on the will of nations and governments; the basis of our interaction with the rest of the world is goodwill in return for goodwill, honesty in return for honesty, and trust in return for trust. We have always called for the emergence of a nuclear-free Middle East. My government has always been in quest of a win-win, balanced and sustainable deal and such a deal would certainly serve the interests of the Middle East and the world,” he said.

“P5+1 has two options to choose from. Either, it has to stick to the principles of logic and international law to reach a deal; the sooner that deal comes, the better it will be for everyone. Or it can opt to deny the realities and expect to see Iran’s peaceful nuclear program land on the fast track. They have once chosen the second option and found out that sanctions and pressures won’t work in dealing with Iran which has remained steadfast on its path,” the president concluded.