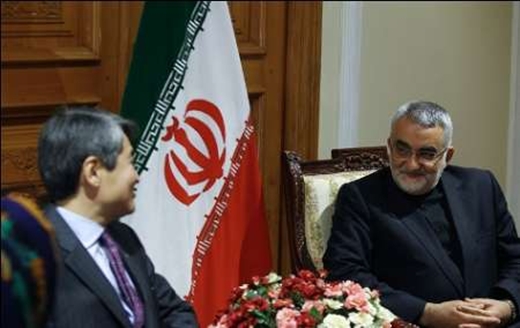 Boroujerdi condemned recent terrorist attacks in Kuwait, Tunisia and France and said such incidents show that terrorism poses a grave threat to global peace and security.

Chairman of Parliament’s National Security and Foreign Policy Commitee Alaeddin Boroujerdi said the US and its allies made a big mistake by supporting terrorist groups in the Middle East and curbing these groups now requires international cooperation.

He made the remarks in a meeting on Saturday with the visiting South Korean Vice Foreign Minister Cho Tae-yong during which the MP said Tehran and Seoul have the potential to upgrade their bilateral relations.

Boroujerdi said Iran and South Korea can build on their high-level parliamentary and executive contacts and extend it to promotion of trade, cultural and scientific cooperation.

The lawmaker referred to the high standard of human rights in Iran compared to other countries in the region and said basic rights of women are violated in many countries.

He also condemned recent terrorist attacks in Kuwait, Tunisia and France and said such incidents show that terrorism remains a grave threat to global peace and tranquility.

He also slammed the Saudi-led air raid aggression on neighboring Yemen and said killing civilians, including children and women, is condemnable.

The South Korean official said the purpose of his visit to Iran is consultation on activating potential bilateral cooperation areas.

Cho welcomed expansion of ties in cultural, arts and scientific areas and said his respective country believes that on human rights issue, each country’s traditions and customs should be regarded separately and not treated with similar standards.

He agreed with the Iranian position that the IS terrorist group has to be fought based on international cooperation and said South Korea supports humanitarian assistance to Syria.