Thousands in Switzerland March to Protest at Trump’s Visit (+Video) 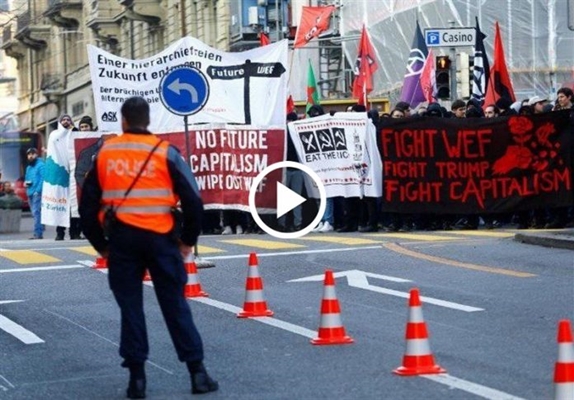 Thousands of people marched through Zurich on Tuesday in protest against US President Donald Trump’s participation at the annual World Economic Forum in Davos.

Leftists organizers called for the protests under the mottos “Trump Not Welcome” and “Smash WEF!”

Protesters held placards which read, ‘Who was shit hole?’, ‘Not Welcome – Tuck Frump’, and ‘Women rise up against Trump, against rape, against sexism’.

One of the protesters said, “I wished that he [Donald Trump] is not welcome here from the state, because he is the epitome of everything that is disgusting with capitalism.”

Trump is due to speak on Friday at the WEF in the Alpine town of Davos, an annual meeting of global business and political leaders where protests have been banned, Reuters reported.

The protesters set off flares, smoke bombs and fireworks throughout the protest. Police in riot gear and a water cannon truck were deployed, but did not intervene despite damage to buildings.

Similar protests were held in the Swiss cities of Geneva, Bern and Lausanne as well as in the German cities of Freiburg and Nuremburg.