Thailand is among the world’s top tourist destinations as it annually draws millions of people from around the globe and can be a role model for other countries, particularly Iran.

The tourism industry is a major drive force behind Thailand’s economy, contributing 17.7 percent (over $70 billion) to its $340 billion GDP last year, which is quite a significant figure that any country might crave for.

According to a report by IFP correspondent, Thailand’s Minister of Tourism Kobkarn Wattanavrangkul believes that although tourism, which she brands as “the lion’s share of the Thai economy”, is booming, the South Asian country needs to further improve it in order to attract more “quality tourists”.

“The tourism industry in Thailand is growing and we are aiming to be a high quality destination. There are still many things that we have to develop to make sure tourists have a better stay in Thailand” Wattanavrangkul says.

Official figures show more than 32.5 million tourists, the majority of whom are Chinese (27 percent), visited Thailand in 2016 which shows a rise of nearly 9 percent compared with the year before. The significantly high number puts Thailand among top 12 countries dominating global tourism. In Asia, it stands second after China.

However, its bustling capital Bangkok, with many high rises, hotels, and large shopping malls, is the world’s most popular travel destination when it comes to cities. Thanks to over 21 million overseas travellers who visited Bangkok last year, the Thai capital ascended on the throne, pushing aside London.

The Thai tourism minister says the government plans to bring even more foreign visitors through a string of measures which include a project to facilitate traveling between Thailand and other countries.

“The Ministry of Tourism desires to provide foreign tourists with the easiest way of traveling,” Wattanavrangkul points out, adding that a working group comprised of several ministries is cooperating to implement the project.

Along with Bangkok, other cities like Phuket, Thailand’s largest island, and Pattaya are popular tourist spots. Tourists come to Thailand for three main reasons; shopping, entertainment and enjoying its nature and tropical wet and dry climate.

The government, however, seeks to broaden the scope by offering more things to do and more places to go. Wattanavrangkul says her ministry wants to change the outlooks.

As the country’s first female tourism minister, Wattanavrangkul has promised to redefine Thailand as a female-friendly travel destination.

To do the makeover, she says, the country has taken several measures aimed at encouraging foreign families and females to give it a second thought before they give up Thailand for another country for holidays.

A key step, as she says, was to “introduce new tourist destinations and activities in Thailand” for families and females.

“Last year, men constituted 70 percent of the Japanese tourists to Thailand and women only accounted for 30 percent… This lack of female tourists was maybe because of their misperception of Thailand. They thought the country had nothing to offer, whereas, women can also travel to Thailand and have lots of fun and relaxation and get refreshment,” the minister says.

“Pattaya is no longer Thailand’s only tourist destination. There are a large number of new places and smaller towns where tourists can touch the local experience,” boasts.

The severe-looking minister sounds to be right. In my recent trip to Thailand with a group of Iranian journalists, I stayed two days on a beautiful island with a dense forest and sandy beaches.

Ko Chang, meaning the island of elephants, is located 310 kilometres southeast of Bangkok. We took a half-an-hour ferry ride to reach an island no Iranian has ever set foot on.

During our comfortable stay at a reasonably priced five-star hotel, we went snorkelling around three isles near Ko Chang, visited Mu Ko Chang National Park, experienced a soothing Thai massage at a top-notch spa and visited the elephant camp where we mounted the mega mammals for an hour-long ride on a bumpy dirt path through a thick forest.

Amazingly, the island has really a lot to offer to families.

Tourism plays an important part for Thailand, a nation of 67 million people. According to the tourism minister, some 4.5 million Thais are directly and indirectly involved in the industry.

Due to political upheavals in recent years, Thailand’s tourism lost some steam but soon managed to bounce back.

Wattanavrangkul stresses that “a stable political situation” could help “improve the quality of life” and bring about a “better future for Thais.

A Role Model to Look up to

As a country with countless tourist attractions, Iran can learn a lot from Thailand to boost ecotourism. According to the Thai tourism minister, last year up to 120,000 Iranians took all the way to Thailand to spend a few days there, whereas, only 5,400 Thais came up to Iran to see the ancient civilisation of Persia and enjoy its four-season climate and nature.

Last September, Massoud Soltanifar, the then chief of Iran’s Cultural Heritage, Handcrafts and Tourism Organization met Wattanavrangkul, who was on an official visit to Iran. At the meeting Soltanifar expressed Iran’s willingness to “make use of Thailand’s experiences” to promote tourism.

Why not? Iran can look up to Thailand as a role model to revitalize its tourism sector through which it can create more jobs, spur its economy and once again make a name among top tourist countries. 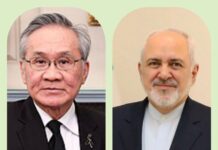