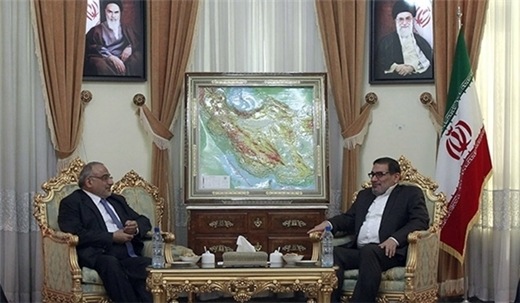 “Destruction of the regional countries’ economic infrastructure, including Iraq and Syria, by the terrorists and the ineffective attacks by the coalition fighter jets are interrelated actions to prevent Islamic countries’ economic growth,” Shamkhani said during the meeting in Tehran on Tuesday.

Elsewhere, he referred to the falling oil prices, and said it can provide an opportunity for the oil producing countries to decrease their dependence on crude sales and reform their economic mechanisms.

Shamkhani underlined Iran’s determination to increase its economic power based on cooperation with the neighboring states and weaken the influence of oil on political attitudes.

He also pointed to Iran and Iraq’s cooperation in extracting oil from joint oil and gas fields, and said such cooperation can be a role model for other countries.

Abdul Mahdi, for his part, stressed Baghdad’s interest in deepening ties and cooperation with Tehran, and said, “We are trying to use Iran’s valuable experience to reconstruct Iraq, especially its oil, gas and petrochemical industries.”

Iran and Iraq had agreed in July 2013 to pursue development of their joint oilfields through setting up joint companies under a single management. The two countries have also held comprehensive expert talks on the same issue.

Azadegan Oilfield is the biggest oilfield which is owned jointly by Iran and Iraq.

Other joint Iran-Iraq oilfields are Yaran, Naftshahr, Azar and Karkheh.

Under the agreement signed in July 2013, the two countries will establish joint ventures to carry out the exploration and development of joint oil and gas fields.

The two sides also agreed to work together to settle territorial and ownership differences.

Iran, which sits on the world’s second largest natural gas reserves after Russia, is making efforts to raise its gas production by increasing foreign and domestic investments, especially in South Pars gas field.

Zanganeh and al-Mahdi said that time is ripe for development of Tehran-Baghdad relations.