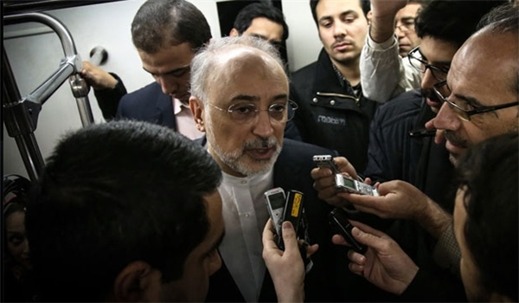 Salehi said the IAEA had 18 questions and we have responded to all of them but two.

Head of the Atomic Energy Organization of Iran (AEOI) Ali Akbar Salehi announced on Monday that Tehran is working on responses to the only two remaining questions of the International Atomic Energy Agency (IAEA).

“The IAEA had 18 questions and we have responded to all of them but two; they say that they haven’t been convinced and need more answers and we are trying to respond to them,” Salehi told reporters in Tehran.

Stressing that the IAEA is regularly inspecting different nuclear sites in Iran, he said the UN nuclear watchdog has a resident inspector in Iran who is replaced every two weeks.

In relevant remarks in November, the Caretaker of Iran’s Permanent Mission to the UN Gholam Hossein Dehqani underscored that Tehran would continue its cooperation with the IAEA to remove any ambiguities about the country’s peaceful nuclear program.

Addressing the UN General Assembly in the presence of Director-General of the IAEA Yukiya Amano in New York, Dehqani rejected alleged military dimensions to Iran’s nuclear program, saying that Iran had no weapons program.