Tehran police trying to break up illegal gathering outside parliament 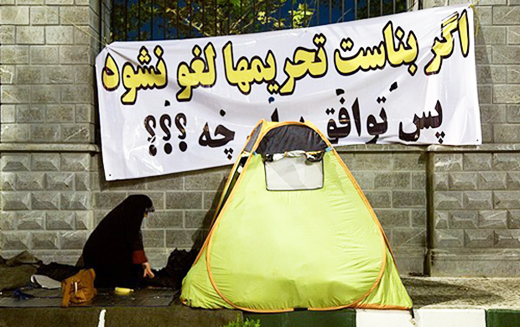 Organizers of an illegal gathering have refused to end their unlawful assembly after Tehran police chief personally asked them to peacefully break up.

Tehran Police Chief Brigadier General Hossein Sajedinia on Saturday went, in plain clothes, to the site of a sit-in outside parliament and asked protesters – opposed to the Joint Comprehensive Plan of Action Iran has inked with world powers – to bring their illegal gathering to an end and leave.

The Islamic Republic News Agency (IRNA) on October 3 published a report on Tehran police’s efforts in dealing with the illegal gathering of the so-called Worriers. The following is the translation of the report:

The general met with the organizers of the illegal gathering outside the Iranian parliament and urged them to peacefully end their assembly soon to avoid any possible confrontation.

Eyewitnesses quoted General Sajednia as threatening that police would seriously deal with the illegal gathering which has disrupted traffic and caused obstruction in the area if the protesters did not break up.

Reports have also indicated that Masoud Mirkazemi, an MP who represents Tehran, Shahr-e Rey, Shemiranat and Eslamshahr in the Islamic Consultative Assembly, joined the protesters and voiced his objection to the implementation of JCPOA and defended the gathering.

It came after Tehran governor general and governor’s office announced that the gathering outside the building of the Islamic Consultative Assembly in protest at the JCPOA implementation lacks any permit and thus is illegal.

There was an increased police presence around parliament on Saturday morning with law enforcement units cordoning off nearby streets. The illegal sit-in in opposition to the implementation of JCPOA was staged last week after a few people gathered outside parliament. The protest sit-in is still continuing.

In another development, provocative flyers were distributed in the University of Tehran – the venue of the capital’s Friday prayers – on Friday among worshippers.