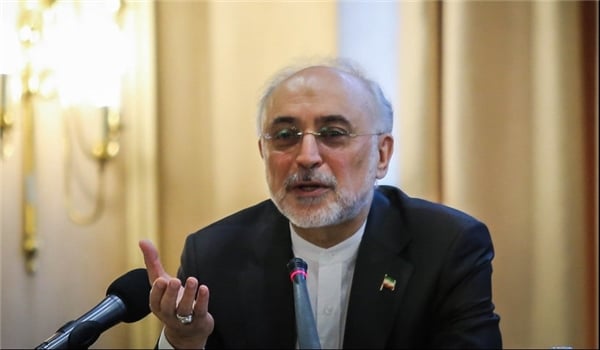 Head of the Atomic Energy Organization of Iran Ali Akbar Salehi said. Iranian nuclear scientists are capable of manufacturing home-grown types of fuel rods or centrifuges, and the country is no longer in need of reverse engineering methods to fulfill nuclear needs.

He added that the Iranian scientists in the AEOI are now able to produce fuel and equipment, including centrifuges, based on their own design and the country’s needs.

Salehi who had announced on Sunday that the country was taking the preliminary steps to produce what he called “modern 20%-enriched uranium” to fuel the country’s reactors, said in the interview that the western states have also understood that Iran no more needs reverse engineering.

“The recent announcement had them realize Iran’s message and notice the events,” he added.

Salehi said on Sunday that “the preliminary moves have started to design modern 20%-enriched fuel and we are on the threshold of it”.

“It is a product different from the former 20%-enriched fuel which could be used to fuel whatever reactor we build like the Tehran reactor,” he added.

“The nuclear reactor in Tehran has been working with the old fuel so far, but the modern fuel will increase its efficiency,” Salehi said.

The AEOI head had earlier warned that his country enjoyed the capability to restore 20-percent uranium enrichment if the 2015 nuclear deal was discarded by parties still remaining under the agreement.

Salehi said in December that under the 2015 nuclear deal, Iran accepted to put confidence-building curbs on its nuclear program, but they do not obstruct the “peaceful activities of Iran’s nuclear industry”.

“Enrichment is currently underway, but we would put aside the 300kg limit (set by the nuclear agreement) whenever we wish, and would do the enrichment at any volume and level,” he said in an interview with state TV on the sidelines of a visit to the Fordo nuclear facility.

“We currently have 1,044 centrifuges in Fordo, and if the establishment wants, we will restart 20-percent uranium enrichment in Fordo,” he noted.

Salehi expressed hope that the remaining parties to the nuclear agreement would deliver on their promise and implement their commitments in order to fill the gap created by the US after its unilateral withdrawal from deal, officially known as the Joint Comprehensive Plan of Action (JCPOA).

Otherwise, he said, Iran will have to reduce its JCPOA commitments.

“I would like to warn that this is not a bluff; I have kept my word whenever I’ve said something. Now I’m emphasizing once again that if the establishment wants, we can easily return to the 20-percent enrichment, and meet the country’s needs at any level and volume,” he noted.