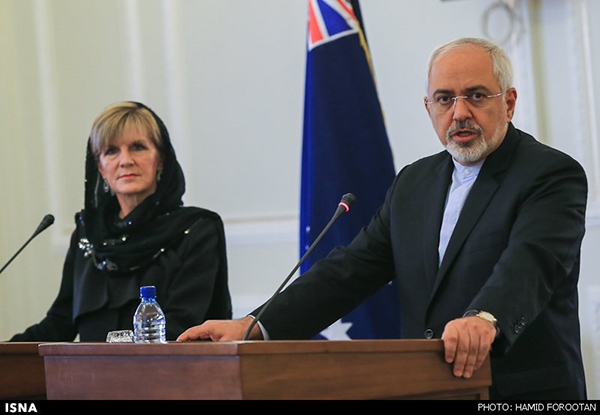 The top Australian diplomat said Iran and Australia in cooperation with other countries and the Iraqi government should contribute to efforts to defeat IS.

The Iranian foreign minister has reiterated Tehran’s concerns over acts of terrorism and extremism in the Middle East region.

In a joint press conference with his Australian counterpart Julie Bishop in the Iranian capital, Tehran, on Saturday, Mohammad Javad Zarif highlighted that both Tehran and Canberra are concerned over terrorism in the region, including acts of violence committed by the ISIL Takfiri terror group.

Zarirf said the fight against ISIL should be coordinated by the Iraqi government, saying, “Anything Iran does in Iraq is in coordination with Baghdad.”

Zarif noted, “A larger global campaign is required to deal with ISIL.”

Echoing Zarif’s remarks, the top Australian diplomat said Iran and Australia in cooperation with other countries and the Iraqi government should “contribute to the defeat of this terrorist organization (ISISL),” and noted that “a more dangerous form of global terrorism” is jeopardizing the world.

She underscored that every effort should be made to prevent the “spillover of terrorism from Iraq and Syria” to other countries.

Syria has been grappling with a deadly war since March 2011. The violence fueled by Takfiri groups has so far claimed the lives of over 222,000 people, according to the so-called Syrian Observatory for Human Rights.

Elsewhere in their joint news briefing, the two foreign ministers voiced concern over the scourge of human trafficking and stressed the need to take measures to ameliorate the situation of asylum-seekers.

In recent years, the Australian government has been under fire at home and abroad for its strict immigration policies and treatment of refugees.

According to reports released by rights groups and humanitarian organizations, asylum seekers at the Australia-run detention centers live in dangerous and demeaning conditions.

The United Nations High Commissioner for Refugees (UNHCR) has described the living conditions at Australia’s detention centers in Nauru and Papua New Guinea as “harsh,” which “impact very profoundly on the men, women and children housed there.”

Responding to a question on talks between Tehran and six world nations on Iran’s nuclear program, Zarif said the nation’s rights should be recognized.

“The best way is through recognition of Iran’s rights and mutual respect”, he noted, underscoring that “(The) Military option won’t work in dealing with Iran.”

Iran and the five permanent members of the UN Security Council – the United States, Britain, France, China and Russia – plus Germany reached a mutual understanding in Lausanne on April 2, following eight days of marathon talks.

According to the statement, no Iranian nuclear facility will be shut down while all political and economic sanctions against the Islamic Republic will be terminated.

At the head of delegation, Australian Foreign Minister arrived in Tehran early on Saturday.