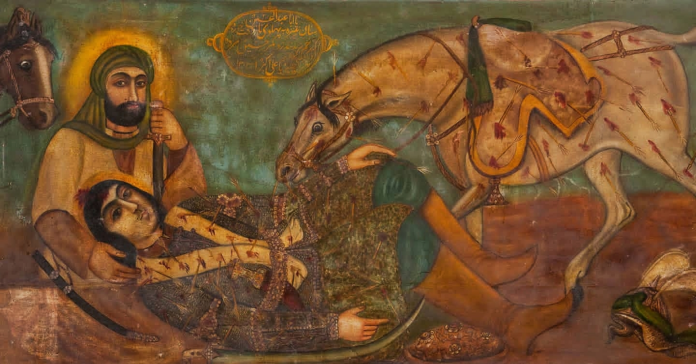 As political revolutions are born from within lower and middle classes of society, teahouse paintings, too, emerged from low and labour classes of society without belonging to any special school of art, thus turning into a school itself and a trailblazer in the field of art.

The “teahouse painting” is an expression used to describe a type of narrative oil painting illustrating concepts such as wars, religion and rituals.

Teahouse paintings were created by artists not officially trained in any school of art during the Constitutionalism Era.

These works of art were based on popular-religious traditions and were inspired by the naturalistic style of painting which was all the rage at the time.

Meanwhile, some believe the teahouse painting dates back to the Safavid era.

Teahouse paintings have, for three centuries, been used to decorate the walls of teahouses, religious sites, etc.

Teahouse paintings are sometimes referred to as “imaginary” paintings as artists involved in this art consider themselves as imaginative painters.

“The Ashura Imaginary Paintings” is the title of an exhibition which opened on August 13, 2021 in Tehran and showcases the works of Nargess Eshghi with the “Teahouse Painting” theme.

“As, in the past, teahouses where popular hangouts for the general public, and imaginary illustrations met the cultural needs of society under different circumstances, especially during mourning ceremonies and religious occasions, the holding of such an exhibition can be in line with this original Iranian-Islamic culture,” explains Eshghi.

“The teahouse painting is a popular art which emerged at the time of the encroachment of foreign arts by drawing on the original Iranian art associated with the national-religious culture,” she adds.

She says at the moment, tourists, collectors and enthusiasts make the majority of the audience of teahouse paintings.

She believes it is possible to amalgamate the teahouse painting style with other forms of arts.