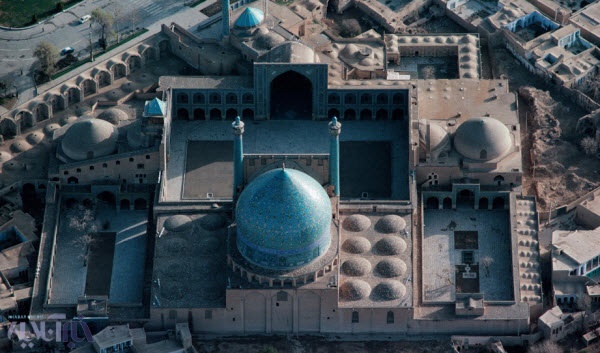 Georg Gerster’s aerial photos of Iran will be demonstrated in a photography exhibition in Tehran in second half of September.

The opening ceremony of a photo exhibition by Georg Gerster, a Swiss artist and one of the pioneers in world’s aerial photography, was held on September 16 at the main photo gallery of Niavaran Culture House.

According to a report by Khabar Online, as translated by IFP, the European artist took seven trips to Iran between 1976 and 1978 and flew for 300 hours in 100 flights over Iran’s sky, taking spectacular aerial photos.

This unique photographic project resulted in a near-complete documentation of the major archaeological sites and important landscapes in the region.

After four decades, Gerster has now returned to Tehran to publicly demonstrate his photos in Niavaran Culture House gallery.

Entitled “Iran through the Eyes of Homa”, this exhibition is being held with the cooperation of Niavaran Artistic Creations Foundation, in which 130 unparalleled photos will be demonstrated.

“We have come back to Iran after 40 years; I have to say everything has changed; I came to this realization when our airplane entered Iran and flew thousands of miles before landing in Tehran. Iran has always been memorable for me and I know this beautiful land quite well. After 40 years we have come here to present the image of those years and these photos are my present to all Iranians”, Gerster said about his trip, having travelled to Tehran along with two of his students.

The images portray ancient citadels, desert ruins, and rice fields spreading like a vast patchwork quilt in a river delta. There are many unexpected sights, such as the bird’s-eye view of a crowded ski resort in the Elburz Mountains, within easy reach of Tehran.

Iran’s densely packed cities, such as Bushehr, located on the Persian Gulf, are elegantly captured by Gerster. They appear so very different from Western European or North American cities of the same period; the complex, interlocking flat-roofed buildings are both timeless and timely, with architecture that has stood unchanged for thousands of years, along with brightly-colored 1970s cars parked in the colonnaded courtyards.

Even the Iranian landscape contains surprises: on closer inspection, the elaborate patterns made in fields with tractors and ploughs turn out to have more to do with politics than agriculture or land art. A law at the time Gerster was photographing allowed people to claim unused land by planting crops on it, and this type of ”agridoodle” was apparently enough to support such a claim.

“Iran through the Eyes of Homa” exhibition was kicked off on Friday, September 16, in the presence of various artists, some of European embassies’ officials and journalists. Here are Tasnim’s photos of the opening ceremony

The exhibition will be open to the public until October 1.