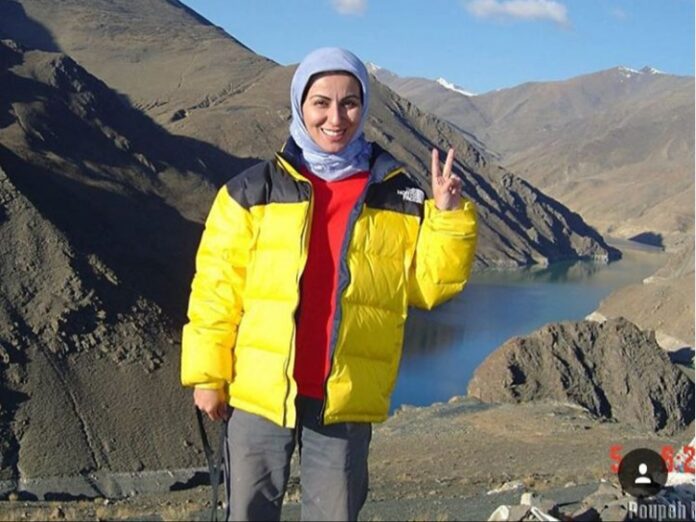 Poupeh, an Iranian lady who has gone down in history as the first Muslim woman to have cycled around the world, recounts how her wanderlust and love for peace pushed her to begin a solo journey to different world continents with a bicycle.

Poupeh Mahdavi Nader began a journey fifteen years ago by cycling around the world which took her about one year and a half, 16 months and 4 days to be exact.

Mahdavi Nader has become the first ever Muslim woman who has cycled around the world. She also served as a peace envoy in the first conference of the International Peace Youth Group in South Korea in 2004. She was given the Champion of Peace by the UNESCO in 2007.

Also in 2007, Poupeh made a one-week attempt in the US Congress to prevent the closure of Yahoo accounts in Iran. Here you can read an excerpt of Shahrvand newspaper’s interview with the Iranian cyclist.

Q: Tell us about your travels. How did you decide to turn into a world tourist?

A: I used to tread Iran on foot at age 20 to 22. Since my childhood, I had two dreams in mind: Becoming a world tourist and then owning a two-storey house with one storey for myself and the other one serving as an orphanage. One of my dreams came true soon. But the other one was traveling around the world. So, I began mountaineering seriously in my 20s and went to mountains in my free time. Then I began to tread Iran on foot with a backpack.

A: Before beginning my journey, I consulted with Dr. Sharyar Rouhani. He advised me to follow up my dream, saying if you don’t go after your dreams, you would deeply regret in your later life. That was enough for me because I got my reply. So, I immediately began my planning and embarked on my journey with the main theme of: In the Name of Love, Friendship and Global Peace.

Q: Money plays a key role in such project. How much money did you have?

A: Yes, I had to find a sponsor. I spent eight months to find a sponsor but all to no avail. I went to a bicycle store and said I can make advertisement for you in exchange for a free bicycle. My offer was rejected. So, I borrowed some money to buy a bicycle and began my long journey with only 350 dollars.

Q: The US launched its war on Iraq exactly on the same day that you decided to start your journey. Did the subsequent insecurity ever discourage you?

A: It seems to me that it was the Almighty God’s miracle that a girl who decided to embark on such a long journey was named Poupeh, was a Shiite Muslim from Iran, and the journey coincided with a deadly war. The war was enough to dissuade a person and put her or him into trouble. But if you do your best and ask God to help you, you will become successful. When the war broke out, most of my friends called me to dissuade me. When I decided to begin my journey, the TVs showed footages of American soldiers walking along the Turkey- Iraq border. I could face them within three weeks. I didn’t want to begin my journey and cut it short immediately. So, I waited for another 14 days and finally decided to begin the journey not through Turkey or Greece. I purchased a plane ticket to Italy and flew there and called for a meeting with Pope John Paul II. Finally, I managed to meet Cardinal Renato Martino who served as the chairman of Vatican’s Pontifical Council for Justice and Peace. I thought it would be the best step for achieving peace: to visit the center of Christianity in the world as a Muslim woman and begin my journey from there.

Q: Tell us about your itinerary.

A: I travelled to Italy, France, the Alps, the UK, America, Saudi Arabia, India, Nepal, China, Tibet and South Korea.

Q: It is said that during your trips, you usually hold some courses training people how to make cheap trips.

A: Yes. Since I have the experience of making journeys with the lowest cost, I like to share them with people who are interested in traveling. I teach them how to make money during their journey and survive harsh conditions.

Q: As a person who has visited most countries in the world, have you ever wanted to live in another country?

A: When I arrived in northern California, the Iranian diaspora there thanked me for what they called brining honor to all Iranians and gave me a full scholarship. They also promised to provide me with a house and a good car and job. But like all other people, I only live once, so I decided to remain in my own country.