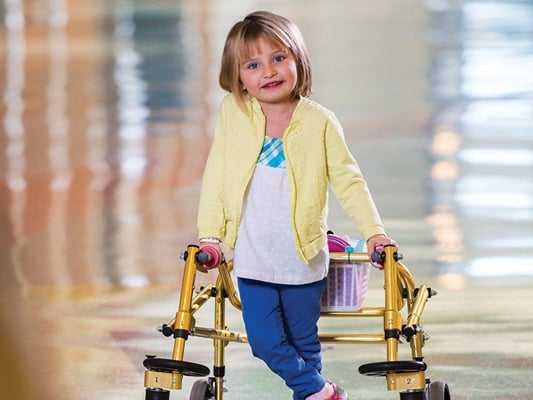 Spinal muscular atrophy (SMA) is a kind of genetic-nervous-muscular disease in which the patient comes down with movement disorders. The disease is very hard to treat, but it is now possible in Iran to diagnose and prevent it through DNA extraction and genetic tests.

In this disease, the patient’s muscles become soft, causing problems in walking, controlling the head and neck, as well as swallowing and breathing.

The SMA is also known as muscular-spinal atrophy and the Werdnig-Hoffmann disease. It is a progressive genetic nervous-spinal disease which gets worse as time passes by, and is more frequent in families where relatives marry each other.

The SMA has different types. In less severe types, the patient will continue to live until a young age and adulthood, and only type I of the disease is deadly.

Global figures suggest one out of 6,000 infants are born with spinal muscular atrophy, and almost one out of 40 carries a faulty gene. The disease has a considerable prevalence in Iran. The disease may begin to develop during the embryonic stage or adulthood. In either case, the effect of the disease on individuals will increase as time passes by because it is a progressive disease. The SMA has different kinds, some of which are less severe and some are more severe. In the severe type of the disease, the infant is born in a bad general condition with soft muscles and problems with breathing, and then he/she dies. In other kinds of the disease, the patient will live until a young age and adulthood.

As the disease is hereditary, genetic disorders may also emerge in couples who were not relatives when they married. However, it has been proven that family members who were relatives when then married are twice as likely to have babies with genetic diseases. The SMA is a recessive-gene disease, i.e. the baby will contract the disease only if both parents (father and mother) carry the SMA gene. So, the chances of babies coming down with the disease is higher if parents are relatives because relations are genetically more similar. Nevertheless, if one of the parents carry the faulty SMA gene and the other is healthy, their children will not contract the disease. Rather, they will just carry the gene and could pass it on to the next generation.

Fortunately, now it is possible in Iran to diagnose and prevent the disease through DNA extraction and genetic tests.