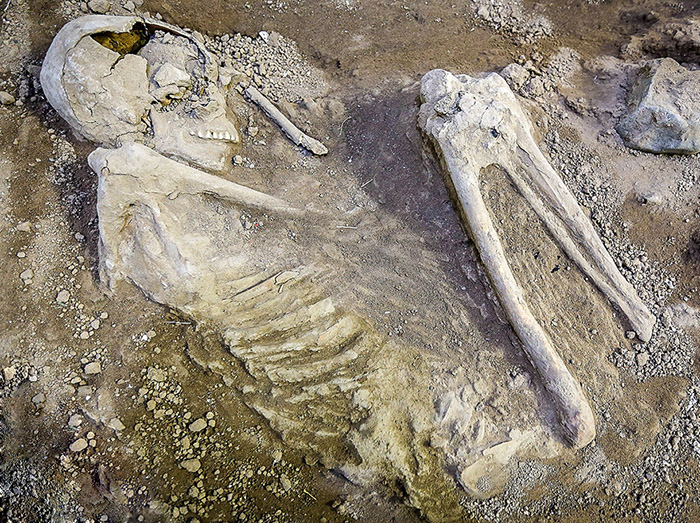 The nearly intact skeleton of a man as old as 7,500 years old was discovered in a hill in Shazand County in central Iran, and was later transferred to a museum in Arak, the capital of Markazi province

Here’s IFP’s translation of excerpts from Mehr’s interview with Hamid Farahi, the head of the team dispatched to the site by the National Institute for Conservation and Restoration of Iran’s Cultural Heritage, Handicrafts and Tourism Organization (ICHTO):

The 7,500-year-old skeleton was discovered 6 metres down the earth in Sar Sakhti-ye Olya village in Shazand, and was transferred to Chahar Fasl (Four Seasons) Museum in Arak.

“Since the skeleton had been buried deep in the earth, the transfer team had great difficulty in moving the skeleton to the museum,” Farahi said.

“Before transferring the skeleton to the museum, we had to apply techniques of cutting and plaster moulding,” he noted.

It takes two months before the skeleton bones become stiff, he said, adding, “Once we finish strengthening the skeleton, it will be displayed to the public.”

Some significant objects including turtle shell and a series of grinding tools were also found buried with the man, he added.

Fathollah Niazi, the leader of the excavation team, mentioned that the man had been buried squatted and probably facing to the sun.

“He was buried with a few heating items such as a heater, because people at that time believed that life continues after death,” he underscored.

Niazi further pointed to the healthy teeth and bones of the skeleton, adding that “the type of the soil and the existence of some elements such as lime, very low levels of acid and high amount of salt are the main reasons.”

Here are Mizan‘s photos of the skeleton and the transfer process: