‘Seoul Keen to Keep Good Ties with Tehran despite Sanctions’ 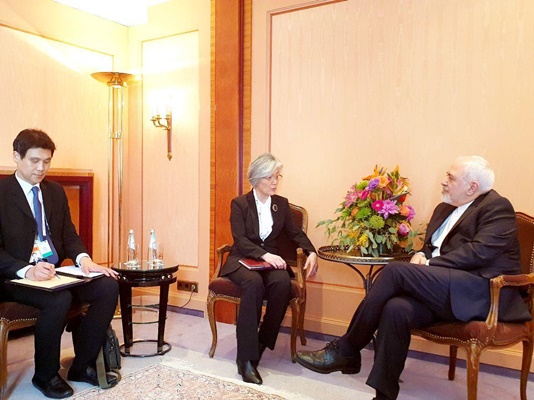 South Korean Foreign Minister Kang Kyung-wha has expressed her country’s willingness to maintain its friendly relations with the Islamic Republic of Iran despite the anti-Iran pressures.

She made the remarks in a Friday meeting with Iranian Foreign Minister Mohammad Javad Zarif in the German city of Munich.

During the meeting, which was held on the sidelines of the 55th Munich Security Conference, the Korean minister offered sympathy over the recent terrorist attack in south-eastern Iran.

She also expressed Seoul’s interest in continuing decades of good relations between the two countries despite pressures and sanctions.

The two sides also conferred on economic and trade relations between Iran and South Korea, the most important regional and international issues including the situation in the Korean Peninsula, the Iran nuclear deal, and other topics of mutual interest.

Back in December, Iran finalized a deal with South Korea to trade oil for goods as part of a larger strategy to bypass US sanctions re-imposed on the country following Washington’s unilateral withdrawal from the 2105 Iranian nuclear deal.

Head of Iran-South Korea chamber of commerce said the deal was made for returning oil export revenues from South Korea.

Seoul has fully complied with the US sanctions in the past few months, and totally stopped its oil imports from Iran in September for the first time in six years. The country made the decision before US sanctions against Iran take effect in November 4.

South Korean buyers, which are among major Asian buyers of Iran’s crude oil, suspended Iranian oil loading from July due to the uncertainty of getting a waiver from the US government.