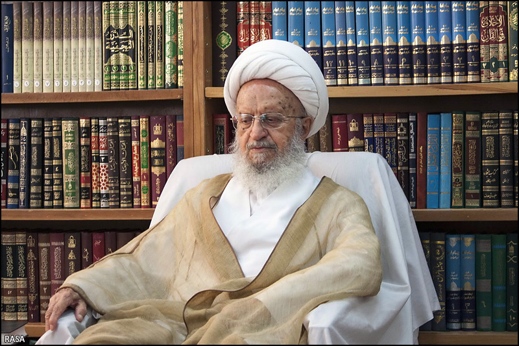 Grand Ayatollah Nasser Makarem Shirazi has said that the nuclear deal was a big victory for Iran and it displayed the ineffectiveness of opposition by the Zionist regime and its desperation.

A senior Iranian cleric has said that the Supreme Leader’s sagacious prudence and unwavering support set the stage for the establishment and people to walk down the path of honor and pride [during and after nuclear talks].

Grand Ayatollah Nasser Makarem Shirazi, a Shiite source of emulation, made the remark in a meeting with Mohammad Nahavandian, President Rouhani’s Chief of Staff on July 15 and added that he had always prayed for the success of Iran’s nuclear negotiators and the fruitfulness of nuclear talks which proved to be tough and complex.

Fararu.com on July 16 released a report on the meeting between the grand ayatollah and the government official one day after Iran and six world powers clinched a landmark nuclear deal in Vienna following 18 days of marathon talks in the Austrian capital. The following is the translation of the report:

The senior cleric expressed satisfaction with the conclusion of the historic deal, thanked the Iranian nuclear team for their efforts and congratulated them on this victory [inking the nuclear deal]. He said that the deal was a big victory [for Iran] and showed the ineffectiveness of opposition by the Zionist regime and its dismay and desperation.

He went on to say that the world welcomed the deal, adding this makes the ill-wishers of the Iranian nation pay a dear price for their opposition [to the deal] or failure to live up to their commitments [under the nuclear deal] and helps implement the deal successfully.

Ayatollah Makarem Shirazi further said that the government has prudently helped the nuclear case end conclusively, advising the Cabinet to provide people with transparent information on the nuclear deal so that certain individuals cannot kill people’s hope and jubilation and destroy the public trust in officials on different grounds.

He also highlighted the need for the management of the increased expectations which people may hold and hope to see the government immediately remove the existing problems as a result of the nuclear deal.

The grand ayatollah praised the Supreme Leader’s support for the government and the nuclear negotiating team as very important, saying that some had prepared themselves to oppose the nuclear deal, but the Leader’s sagacious prudence and his immediate and timely support [for nuclear talks] cleared the way for people and the establishment’s officials to walk down the path of honor and pride.

Nahavandian, for his part, said that the government owes its success to the prayers and sound guidance of the sources of emulation.

The president’s chief of staff also provided the senior cleric with a report on the government’s main plans and briefed him on the key details of the nuclear deal Iran and P5+1 struck on Tuesday (July 14).