Why Is Saudi Prince Mohammed bin Salman’s US Visit Important?

Amid Riyadh’s recent tensions with Washington and the United Nations, Saudi Arabia’s Deputy Crown Prince and Defence Minister Mohammed bin Salman has travelled to the United States, and is going to meet with President Barack Obama and UN Secretary-General Ban Ki-moon.

Here’s IFP’s translation of a report by Alef on why the powerful Saudi prince’s visit to the US is important. We have also added certain information to the report from other sources.

He arrived in Washington on Tuesday morning and was welcomed by Secretary of State John Kerry.

The visit of bin Salman, whose powers include his role as Defence Minister, comes amid a diplomatic row with the United Nations and policy differences with the United States over the war in Syria and relations with Iran.

A diplomatic fight, usually kept behind closed doors, exploded in public Thursday, June 9, as the UN’s Ban accused Saudi Arabia and its military allies of placing “undue pressure” on the international organization.

Last month, the Saudi-led coalition was put on a blacklist over its role in the deaths of children in Yemen. The UN report, which annually shames the worst perpetrators, announced that the coalition was responsible for 60% of the 1,953 children recorded as killed or maimed in the conflict in 2015.

A source told CNN earlier last week that the Saudis applied full court pressure with a threat to cut off ties with the UN if the organization did not remove the country from the blacklist. The UN source said that a threat of a “total rupture” had been made, placing hundreds of millions of dollars to UN humanitarian agencies in doubt.

It seems like the Saudi Defence Minister’s meeting with Ban at this particular juncture might lead to further controversy.

Based on a Reuters report, the Saudi royal court also announced in a statement late on Sunday, June 12, that the prince would discuss ways of strengthening relations with the United States, which have cooled under Obama’s presidency.

Riyadh has been angry at Washington over the recent détente between the US and Saudi Arabia’s arch-rival Iran, after the implementation of a nuclear deal between Tehran and world powers.

Saudis have also been critical of what they see as foot-dragging by Washington over efforts to end the conflict in Syria by ousting President Bashar al-Assad. Riyadh’s push for his overthrow comes as Washington is doing its best to end the crisis first.

Saudi Arabia has also urged Obama to take a tougher stance on what Riyadh sees as Iranian meddling in the affairs of Arab states. Iran denies such interference.

The Saudis are also planning to put Iran in a critical economic and political situation, as Saudi-led military operations in neighbouring Yemen have put Riyadh in difficult conditions.

A US Congress bill relating to Riyadh’s role in 9/11, and subsequent reports by American media, calling Saudi Arabia “Royal Scum”, has also exacerbated the tension.

However, in a move to demonstrate US goodwill one day before bin Salman’s visit, CIA Director John Brennan announced that Saudi Arabia will be absolved of any responsibility for the 9/11 attacks based on 28 classified pages of a congressional report into the incident.

He noted that there is no evidence that proves Riyadh’s role in the incident, and tried to show Washington’s preparedness to close the case.

Meanwhile, American media reports claimed that Omar Mateen, the guy who attacked a gay nightclub in Florida’s Orlando and killed at least 50, had visited Saudi Arabia and the UAE.

Just one day after the deadly shooting, US Democratic presidential hopeful Hillary Clinton issued a pointed warning to US allies in the Middle East, saying Saudi Arabia, Kuwait and Qatar must stop supporting extremism.

Clinton’s remarks came as bin Salman declared before the beginning of his trip that Riyadh had funded as much as 20% of the money that Clinton has spent on courting voters.

“Saudi Arabia always has sponsored both the Republican and Democratic Party of America,” said Mohammed.

He suggested that the generous contribution had been made to fight opposition to the presidency of the former US Secretary of State, who has surpassed the 2,383 delegates needed to clinch the Democratic Party nomination.

These are among the major developments that could have influence on bin Salman’s US visit and his possible meetings with high-ranking US officials.

Prince Mohammed will meet with top State Department and Pentagon officials as he promotes plans to overhaul the Saudi economy, the world’s biggest oil exporter. He will also travel to California for meetings with Silicon Valley executives. 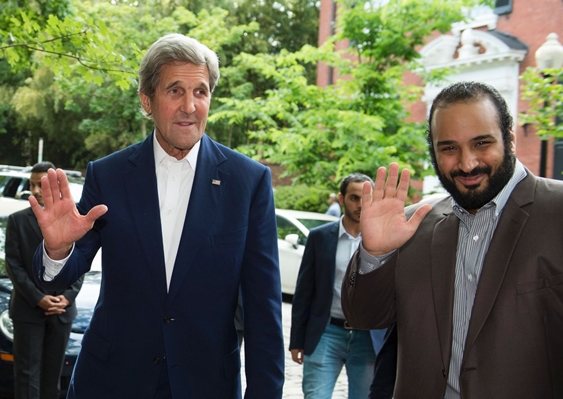 It was billed by Riyadh’s state media as a trip for Saudi Arabia’s powerful deputy crown prince to meet with President Obama and other senior US officials. Now that Prince Mohammed has arrived in Washington, however, it’s still unclear if the president or any White House officials will meet with him, a spokeswoman said on Tuesday.

The absence of any scheduled meetings with even National Security Adviser Susan Rice is fuelling speculation among Gulf experts about a diplomatic snub. It comes amid sharp policy differences between Washington and Riyadh, and unease among US officials about overplaying alliances with the 30-year-old prince, who some view as being locked in a power struggle with the older Saudi Crown Prince, Mohammed bin Nayef.

“Very unusual for the Saudis to come out saying he is meeting with Obama and the White House not confirming it,” said David Ottaway, a Saudi expert at the Wilson Centre in Washington. “They certainly knew he was coming.”

Whatever the case, officials will have much to discuss with the ongoing wars in Yemen and Syria and the expected release of 28 redacted pages of congressional inquiry into 9/11 that some have said accuse Saudi officials of involvement in those attacks.

A Defence Department official told Foreign Policy that Prince Mohammed would meet with senior Pentagon officials this week. The prince met with Secretary of State Kerry on Monday evening. A source close to the Saudis said the prince will hold meetings with congressional leaders in both parties this week and will also meet with Director of National Intelligence James Clapper.

Bin Salman is the son of Saudi King Salman bin Abdul-Aziz Al Saud Salman. An aggressive publicity hound and inspirational figure for many Saudi youths, the Defence Minister came to prominence in 2015 as the architect of Riyadh’s military campaign against the Houthi Ansarullah Movement in Yemen.

In a sign of the Obama administration’s concerns over the civilian death toll in the Yemen conflict, the White House recently blocked the transfer of cluster bombs to Riyadh, citing reports of their use in civilian areas.