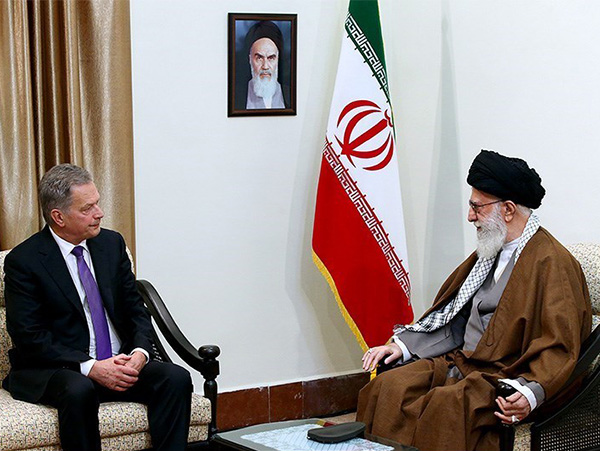 Leader of the Islamic Revolution Ayatollah Seyed Ali Khamenei described terrorism as one of humanity’s painful calamities, and referred to mass killings, including the deadly attacks on Yemeni people by Saudi Arabia, as the “worst kind of terrorism”.

“Terrorism does not only refer to acts of unofficial groups but mass murdering of people by certain governments, including the (recent) Saudi attack on a funeral in Yemen that killed and injured hundreds, is also the worst kind of terrorism,” Ayatollah Khamenei said Wednesday in a meeting in Tehran with visiting Finnish President Sauli Vainamo Niinisto.

The October 8 Saudi airstrike on the funeral in Sana’a, which killed more than 140 people and was condemned by Human Rights Watch as an “apparent war crime”, was one of the deadliest since the Saudi-led coalition launched an air campaign against Yemen in March 2015.

The Leader deplored lack of serious resolve in the world to tackle this type of terrorism in Yemen over one and a half years after the start of the Saudi-led aggression on the Arabian Peninsula country.

“Countering terrorism requires serious determination by all of those who have influence on international powers,” Ayatollah Khamenei said.

The Leader also reiterated that the US and some other governments are not serious in the fight against the inauspicious phenomenon.

“These governments calculate all issues based on their interests and are not after rooting out the disease of terrorism either in Iraq or in Syria.”

Ayatollah Khamenei described Iran’s stance on resolution of the Syrian crisis as reasonable and based on supporting the nation and legitimate government of the Arab country, slamming the insistence by the US and some other governments on changing government in Syria. Elsewhere, the Leader welcomed enhancement of ties between Tehran and Helsinki, stressing that the memoranda of understanding (MoUs) signed between the two sides should become operational.

During the meeting, which was also attended by Iranian President Hassan Rouhani, the Finnish president highlighted the Islamic Republic’s position in the region and its role in the fight against terrorism.

“Iran has done its utmost to root out terrorism and will surely continue to do so,” Niinisto said.

He also referred to his talks in Tehran as positive and underlined the determination of Finland’s traders to forge serious and effective cooperation with Iran.

Heading a political and business delegation, Niinisto arrived in Tehran on Tuesday.