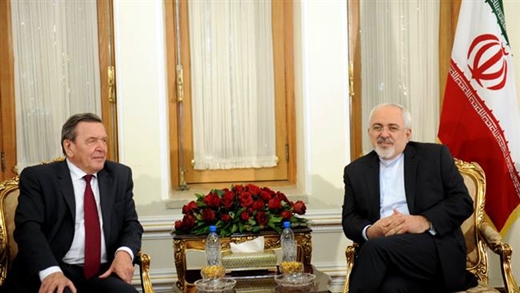 The main threats to the region are the Takfiri and extremist thoughts with their intellectual and financial sources in Saudi Arabia, the top Iranian diplomat said Monday in a meeting with former German Chancellor Gerhard Schroeder in Tehran.

Elsewhere, the top diplomat referred to a July nuclear deal between Iran and the Group 5+1 (Russia, China, the US, Britain, France and Germany) and said implementation of the Joint Comprehensive Plan of Action (JCPOA) will mark a new stage in Tehran-Berlin ties.

For his part, Schroeder said he sees a good prospect for relations with Iran in light of the lasting nuclear deal.

He also noted that Europe expects to tap into Iran’s role and capacities for the settlement of regional crises after the nuclear deal.

The visit by the former chancellor at the head of such a delegation indicates how the European country’s firms are trying to compete with other Western companies in the lucrative market of Iran after the termination of sanctions against the country.

Iran and the Group 5+1 (also known as the P5+1 or E3+3) on July 14 reached a conclusion on a 159-page nuclear agreement that would terminate all sanctions imposed on Tehran over its nuclear energy program after coming into force.