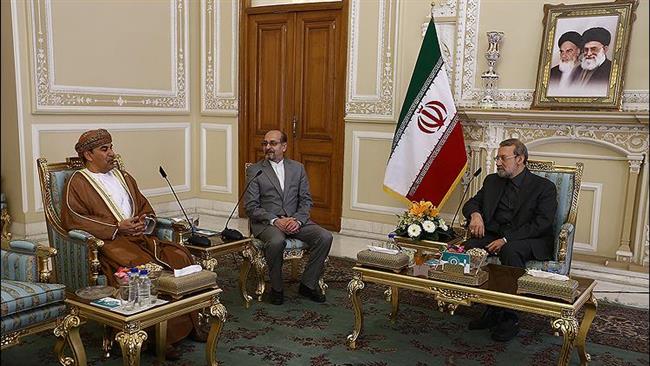 Iran’s parliament speaker said, “Under the current circumstances, measures are unfortunately taken in the region which are detrimental to the Muslim Ummah and beneficial to the Zionists.”

In a meeting with Oman’s Ambassador to Tehran Saud bin Ahmad al-Barwani on Monday, Larijani added that even if a group of people make a move, it should not be regarded as an appropriate reason to cut relations.

Saudi Arabia severed diplomatic relations with Iran on Sunday following demonstrations held in front of the Saudi embassy in Tehran and its consulate in the northeastern city of Mashhad by angry protesters censuring the Al Saud family for the killing of the top Shia cleric Nimr al-Nimr. Some people mounted the walls of the consulate in Mashhad while incendiary devices were hurled at the embassy in Tehran. Some 50 people were detained over the transgression.

Amid growing tensions between Tehran and Riyadh, the Saudi foreign minister on Monday said his country would end air traffic and trade links with the Islamic Republic.

Larijani further expressed concern over the ongoing developments in the region, saying, “Under the current circumstances, measures are unfortunately taken in the region which are detrimental to the Muslim Ummah and beneficial to the Zionists.”

He emphasized that terrorism is a major problem in the region and said the Saudi government does not realize that its military campaign against Yemen leads to spread of terrorism. Yemen has been under Saudi’s unrelenting bombardment since March 2015.

The top Iranian parliamentarian added that Saudi Arabia’s killing of a prominent Shia cleric had “no justification.”

Sheikh Nimr, a critic of the Riyadh regime, was shot by Saudi police and arrested in 2012 in Qatif in Saudi Arabia’s Eastern Province, which was the scene of peaceful anti-regime demonstrations at the time.

He was charged with instigating unrest and undermining the kingdom’s security. He had rejected all the charges as baseless.

The Omani envoy, for his part, said Riyadh’s announcement of cutting ties with Tehran was unwise and incorrect.

Barwani said he thinks that Saudi Arabia’s move aims to exert pressure on Iran and undermine a nuclear agreement reached between Tehran and P5+1.