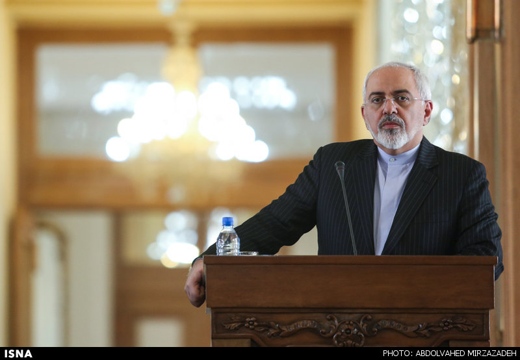 Zarif told a press conference with his Iraqi counterpart the Saudis have moved against measures taken by Iran to contribute to the restoration of peace and unity in the region.

Iranian Foreign Minister Mohammad Javad Zarif says the government of Saudi Arabia must stop measures that only serve to pour fuel on regional tensions in the Middle East.

Speaking during a press conference with his Iraqi counterpart, Ibrahim al-Jaafari, in Tehran on Wednesday, Zarif said the Saudi regime has, over the past two and a half years, moved against measures taken by Iran to contribute to the restoration of peace and unity in the region.

The Iranian foreign minister warned Saudi officials that any measure that would lead to escalation of tensions and create crises in the region will not benefit its perpetrator.

“We invite all parties to become united in the face of extremism, terrorism, sectarianism, and tribalism,” Zarif noted, adding that measures taken to intensify such factors will backfire on those who take such steps.

Zarif stated that Riyadh worked in line with the Israeli regime’s policy to undermine negotiation between Iran and six world powers over Tehran’s nuclear program, adding that the Saudi rulers even cut down oil prices to harm Tehran.

Iran has shown tolerance toward Saudi acts as it believes conflicts in the region will not serve the interests of any side, the Iranian foreign minister said.

Zarif also emphasized that measures aimed at fomenting tension in the terror-hit Middle East region do not stem from the power of those who take them, but are out of pure “weakness.”

Zarif touched on special conditions in the region following the recent execution of senior Saudi Shiite cleric, Sheikh Nimr al-Nimr, adding that he had discussed the issue with his Iraqi counterpart.

He noted that Saudi Arabia’s measure to executive the cleric was by no means justifiable because he was “a person who dedicated his entire life to invite people to Islam through peaceful means, dialogue, and interaction” and took advantage of all civil capacities to oppose recourse to military forces, terrorism and extremism.

“The measure taken against this reformist and scholarly figure is by no means justified and it has been met with hatred and condemnation across the world,” Zarif said.