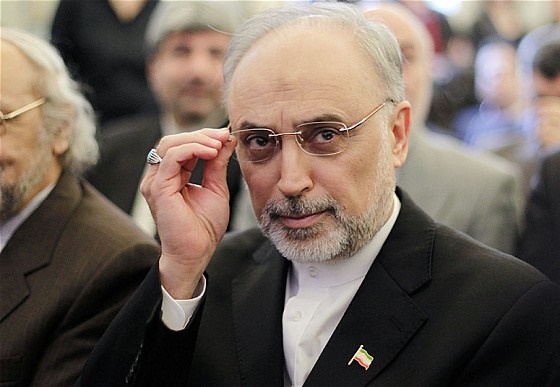 Comments of Ali Akbar Salehi, head of Iran's Atomic Energy Organization, about the most difficult moments of the nuclear talks in a televised interview at "Tonight's Headline."

Ali Akbar Salehi, Head of Iran’s Atomic Energy Organization talking in “Tonight’s Headline” program of Iranian state TV News Channel, answering a question about the most difficult moment of the negotiations said: “while every single moment of talks were difficult added that from later part of Jan. 2015 I directly joined the negotiations. Of course, before that I was also involved in the talks from the sideline and our experts were engaged in discussions.

When Zarif said we have reached stalemate

In one of the meetings our Foreign Minister Mr. Javd Zarif said we have reached deadlock when two sides could not agree on the arrangement of centrifuges propose by the Americans and the arrangement proposed by the Supreme leader was not accepted by the opposite party. The reason I was joining the talks was to explain that why we could not agree with their proposed arrangement. With grace of God and blessing of Hazrat Fatemeh [SA] (the noble daughter of our holy Prophet Mohammad [PBUH]) which coincided with Fatemiyeh days, with our utmost efforts we tried not to give any concessions on that specific case.”

Mr. Salehi added, “US secretary of Energy Mr. Moniz along with his veteran experts and aids had joined the negotiations and against their army we were like a company. We held lots of discussions. The opposite side didn’t accept our calculations. We told them show us your calculations but they refused on the ground that it will be a sort of transfer of knowhow. I told them this is not a practical way of negotiations. Discussions continued. In a private meeting with Mr. Moniz I told him I am here with full authority and I am authorized to make decision, are you also fully empowered to make decisions or decisions must be taken in your capital? He said he is also fully authorized. I told him show me a place on the earth that they enrich uranium in a manner you have in mind then we will do that way as well. He got a bit surprised and the meeting came to an end. Later in a meeting between two of us he said he acknowledges that the way the US suggests us to enrich uranium is not practical and this was their first defeat and stalemate ended.”

Referring to technical aspects of the JCPOA or what is known in Iran as BARJAM, Mr. Salehi said:” this part of our nuclear program has been rather problematic for us because we had no possibility to cooperate with others and Russians were the only one who announced their willingness to work with us on construction of nuclear power plants.”

Salehi added that refusal of other countries to cooperate with us on nuclear issued ended up in our advantage because we became totally self-sufficient on nuclear technology and knowhow.”

head of Iranian Atomic Energy Organization while admitting that Iran needs expertise and experiences of countries with 60 to70 years of experience on nuclear reactors and power plants, said: “following conclusion of JCPOA so many countries have said they are ready to cooperate with us and opportunities are so numerous that we don’t know to choose Europeans or Asians as our partner.

According to Mr. Salehi in 1965 when the question of putting an end on use of nuclear weapons, 5 countries already had developed nuclear weapons and it was said that from now on, no one can develop such weapons.

Then, None Proliferation Treaty (NPT) came to force and Iran also joined this treaty. In case such treaty was not in place, may be today other countries had nuclear arsenals as well. Those 5 countries possessing nuclear weapons should gradually move towards disarmament but as they have force and power, only give empty promises or such initiative.

Mr. Salehi said: “developing weapons of mass destruction is against Iran’s doctrine and Islamic Sharia but as during the 8 years imposed Iraqi war against Iran  no country supplied us with weapons and military equipment we learned that on strategic questions and important technical and industrial areas, such as manufacturing of aircraft, weaponry and other military sectors, we should only rely on our own potentials and due to this same reason our missile program has grown as country’s diffusive weapon.