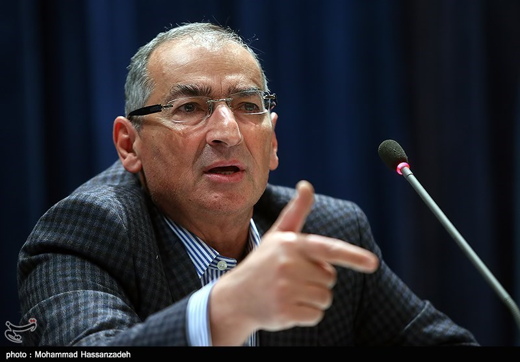 Arman-e Emrooz, a reformist daily, on December 22 ran an exclusive interview with Sadegh Zibakalam, a political analyst and university professor, on the Western-imposed sanctions on Tehran and their effects on the Iranian economy as well as the viewpoints of the so-called Worriers [former President Ahmadinejad’s supporters who proclaim to be worried and keep sounding alarms about the state of affairs in the country since the rise to power of the moderate government of Hassan Rouhani]. The following is the translation of the Q & A:

You have earlier said that a breakthrough in nuclear talks will open up an opportunity for Iran to make an economic leap and that such a possible breakthrough will bring considerable economic benefits to the country.

Despite the fact that sanctions have been said to have no economic impact and the country’s economic woes are blamed on mismanagement, I believe that it’s not true. I don’t want to deny the role of mismanagement. When the eleventh government took over last year, a deputy minister of industries, mines and trade said that half of the country’s production units had been closed down due to lack of raw material, spare parts and venturecapital – for which sanctions are to blame – and the other half are running below capacity.

Over $120 billion of Iran’s assets has been frozen in overseas banks, of which around $4 billion has been given back to Tehran under the Geneva Interim Deal. Iran is to get $700 million each month [under what was agreed in the November 24, 2014 nuclear talks]. If the knot of nuclear talks is untied, the effects of such openness will be first seen on the economic front.

You said in a letter to nuclear negotiators that efforts to circumvent sanctions have given rise to corruption. What do you mean exactly?

Under President Ahmadinejad officials said they had managed to bypass sanctions, but it has become clear today that, in President Rouhani’s words, the then government bypassed the [national] economy, not the sanctions. In other words, no matter what angle you look at the case from, there is ambiguity. When Iran is not allowed to sell more than 700,000-800,000 barrels of oil [per day] and the international financial system learns that the money [which is going to be transferred] belongs to Iran, it blocks the money. That’s why the country has to do its transactions covertly.

Direct talks between Iran and the US were the turning point of Iran-P5+1 nuclear negotiations in Geneva. What’s your take on mutual talks between representatives of Tehran and Washington and their overall impact on the negotiations?

Certainly it is a step forward. We should have opened bilateral talks with the US many years ago and asked ourselves why Iran harbors hostility toward the US. Now it will be very helpful if we review the areas of contention between the two countries and mull over which line each side has taken and what they are calling for.

Although the US foreign policy establishment has one single attitude, various political groups have taken different attitudes toward Iran’s nuclear case. How should Iran react to such groups and their approaches?

Political groups in the US, as a whole, were opposed to Iran. Things changed after June, 14, 2013 [when President Rouhani came to power] which was followed by efforts by Messrs. Zarif and Araghchi and others to have direct talks with the US secretary of state and other American negotiators. They did what they did to change the atmosphere. This [change] was missing before.

But now senior US officials have met with Dr. Rouhani’s Foreign Minister [Mohammad Javad] Zarif, sat around the negotiating table and exchanged handshakes. This has not been easy.

In the interim, conservative Republicans in the US believe that Secretary John Kerry and [President] Obama have made a mistake [by dealing with Iran]; that’s why you see Republicans and [Israeli Prime Minister Benyamin] Netanyahu are placing pressures on Obama, trying to make their case that trusting Iran is not the right thing to do.

Republicans are opposed to Iran. That’s true. In the new US Congress which is to meet in a few weeks those who are against Iran hold the majority. I think if we can go tougher on the anti-Iran elements in Washington in coming months, we can remain hopeful about positive results. If so, Republicans will fail in their efforts to impose a new set of sanctions on Iran, because they cannot easily withstand the pressure the public opinion brings to bear. Despite the fact that the Republican-majority Congress is deeply opposed to Iran, I am still hopeful that they cannot slap new sanctions on Iran in the months to come.

In remarks in the University of Tehran, you said that the country owes the opportunity it has been given to openly critique the nuclear policies to hardliners. Would you please elaborate on that?

I really thank the Worriers. They presented us with an opportunity to openly analyze [the upsides and downsides] of the nuclear policies, a first in a decade. After Iran and P5+1 inked the Geneva deal in November 2013, hardliners began to attack the so-called Joint Plan of Action.

Then the so-called Worriers staged [protest] gatherings outside the building which used to serve as the US embassy in Tehran and other places during which they publicly hit out at Geneva talks. Some of them went as far as denounce the Geneva deal as being worse than the Treaty of Turkmenchay [the name of an agreement Iran and the Russian Empire signed in 1828 in Torkamanchay, under which the former ceded to Russia control of several areas in the South Caucasus].

The break came when some criticized the nuclear policies the government of President Rouhani had adopted. After all, double standards were unacceptable. In other words, you cannot let others dispute Dr. Rouhani’s nuclear policies but say that nobody is allowed to challenge those of Mr. [Saeed] Jalili and Ahmadinejad.

When President Rouhani’s nuclear policies came in for criticism, naturally similar policies of Mr. Ahmadinejad and principlists were fair game. At least they were not as off limits as they used to be. This helped me join the ranks of other critics and talk in a roundtable in the University of Tehran. That is what the opponents of President Rouhani’s did in other universities in earlier weeks.

The point is this: you cannot say that opposition to Mr. Rouhani is ok, but you have no right to talk against or critically analyze the nuclear policies of Ahmadinejad, Jalili and their fellow principlists. Undoubtedly, we owe the [open] atmosphere we enjoy today to the Worriers. I really thank them [for what they did].

The very group, as you put it the Worriers, have in recent days strongly railed against what you said in your speech in Tehran University.

I sincerely thank them. Since December 17 when the three-hour meeting was held in Tehran University, attacks were launched in radio and TV programs, as well as a number of principlist newspapers and news agencies against what Dr. Ahmad Shirzad and Dr. Davoud Hermidas Bavand and I said in the gathering. I think it is a good thing, because people – out of curiosity – seek to learn what we said that IRIB and the principlist press keep talking about.

I have made a laundry list of those who have talked against my words in the last 24 hours. These critical views are good because they help society open up [to opposing views].

I really welcome the viewpoints of our friends and remain thankful to them. Basically, this is exactly what freedom, democracy and enlightenment of the public opinion call for. In other words, you can easily talk about different issues and there are other groups which can openly stake out their opposing views.