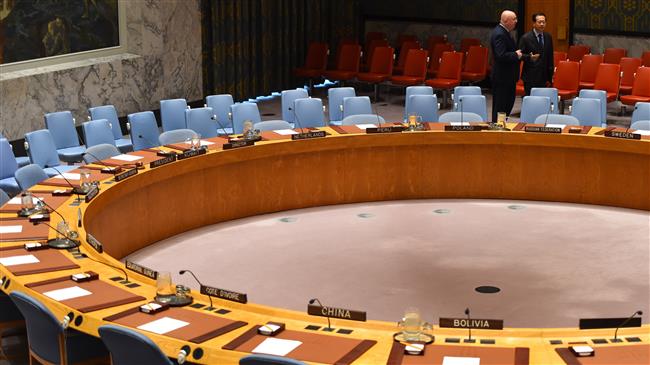 A UK-drafted resolution aimed at pressuring Iran over alleged weapons supplies to Yemeni fighters has failed at the UN Security Council.

On Monday, the resolution gained 11 favorable votes at the 15-member Security Council but was halted by Russia’s veto.

“We cannot concur with uncorroborated conclusions and evidence which requires verification and discussions within the sanctions committee,” Russian Ambassador Vassily Nebenzia told the council.

Earlier in the month, Britain circulated a draft resolution that would renew sanctions on Yemen for another year and also “condemns” Iran for allegedly breaching the 2015 arms embargo on the country by “failing to take the necessary measures to prevent the direct or indirect supply, sale or transfer” of short-range ballistic missiles, UAVs and other military equipment to Yemen’s Houthi Ansarullah movement.

The draft resolution, backed by France and the US, called for unspecified measures in response to the UN report about Iran’s alleged role in Yemen, stressing that the UNSC will take “additional measures to address these violations,” and that “any activity related to the use of ballistic missiles in Yemen” is a criteria for sanctions.

A group of UN experts monitoring the sanctions on Yemen reported to the Security Council in January that it had “identified missile remnants, related military equipment and military unmanned aerial vehicles that are of Iranian origin and were brought into Yemen after the imposition of the targeted arms embargo.”

The UN experts, however, said they were unable to identify the supplier.

Both Tehran and Sana’a have repeatedly rejected the allegations as a fabricated scenario, and said the armed forces of Yemen have strengthened their missile power on their own.

After the veto, the UNSC unanimously adopted a Russian-drafted measure to extended for one year the sanctions regime against Yemen.

Meanwhile, Iran’s envoy to the United Nations says that the US and the UK are trying to distract the international community away from Saudi Arabia’s war crimes in Yemen by drafting such resolutions.

Gholamali Khoshroo further went on to dismiss the allegations that his country had been providing weapons to Yemen’s Ansarullah movement.

The Iranian diplomat also reiterated Tehran’s stance on Yemen, stressing that only a political solution and intra-Yemeni dialog can put an end to the country’s conflict.