Russia: P4+1 discuss one thorniest issue with US 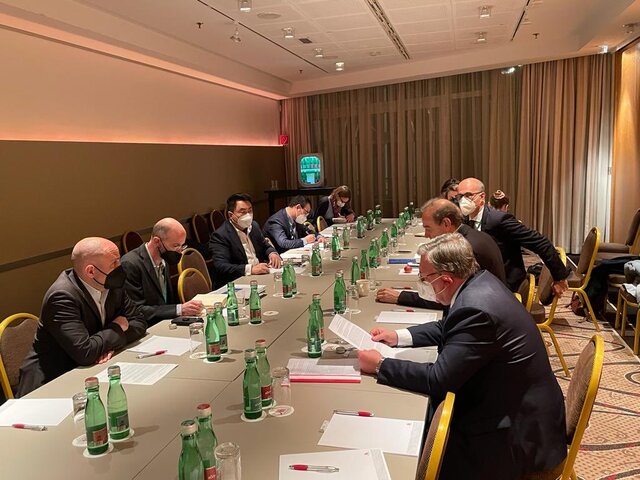 Russia’s chief negotiator in the Vienna talks says the members of the Iran nuclear deal, JCPOA, on Thursday evening held a meeting with the US delegation without Iran.

Mikhail Ulyanov also says the signatories to the JCPOA which are also known as the P4+1 group of countries held targeted negotiations with the US diplomats over one of the thorniest issues on the agenda of the Vienna discussions. He did not specify what the issue was.

The meeting happened after Ulyanov discussed the trend of the talks with South Korea’s deputy foreign minister and European diplomats in the Austrian capital. Meanwhile, US State Department Spokesman Ned Price has said “Iran’s accelerating nuclear steps will increasingly diminish the non-proliferation benefits of the JCPOA if a rapid understanding on mutual return to compliance is not reached.

He said the deal remains in the national interest of the US. Price added that Iran needs to exercise restraint in its nuclear program and pursue negotiations in Vienna seriously and that “our goal is to address that proliferation threat through diplomacy and to test the proposition as to whether a mutual return to compliance with the JCPOA remains a possibility.”

Price also said if no deal is reached in Vienna soon, Washington will take a different course of action.

This comes as Iran’s Foreign Minister Hossein Amir Abdollahian told Al Jazeera news channels that Tehran is hearing good words from the US in Vienna which must be backed up with actions.

Amir Abdollahian added that the Vienna negotiations are on the right track.
In response to the US and European troika’s claim that time is running out for a deal, Iran has said it will accept no deadline for an agreement.

The Vienna talks are aimed at reviving the JCPOA which plunged into disarray after the US unilaterally left it under former president Donald Trump in 2018.