Rouhani: The Guardian council will undoubtedly act based on law 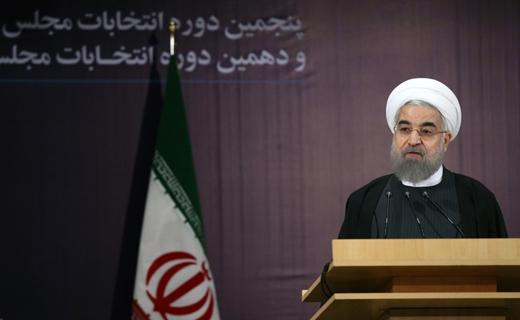 If there is a violation of law in a corner, this government will severely deal with it since we are seeking to stage 100 percent healthy elections with maximum turnout, the president said.

After registration, the Iranian president told reporters: “The Assembly of Experts is a significant institution because the leadership is the most important pillar of the establishment.

“It is very important to us to declare to the world, both in words and action, that people’s votes and ballot boxes are the main decision makers in the country. Today we are getting prepared to hold the 33rd elections after the victory of the Revolution.”

The head of the 11th government also added, “Those who deem themselves as competent should turn a deaf ear to concerns heard here and there. Our country is a country of law, and the Guardian Council undoubtedly acts based on law. The government, Interior Ministry, executive boards, and governors general all act according to law. If there is a violation of law in a corner, this government will severely deal with it since we are seeking to stage a 100 percent healthy, glorious, and competitive elections with maximum turnout.”

Rouhani also recalled the very good participation of women in political, social, cultural and religious arenas and reiterated, “Women should also partake in the Assembly of Experts elections and in the elections for the Islamic Consultative Assembly.”

Rouhani underlined, “To us, the presence of women in the elections is of significance. Though there is no difference between male and female MPs, the presence of a substantial number of women in the chamber is important in the court of world public opinion. That helps the world understand the realities of this country and realize that things are done based on merit and not gender. We expect women, who view themselves as competent for public office, to run.”

The head of the government of Prudence and Hope also said, “We are in a special regional and global situation and we need unity more than ever before. Competition is good but it must be healthy and ethical. In the absence of competitiveness there will be no dynamism. We need dynamism to have a competitive election which will lead to further unity.”