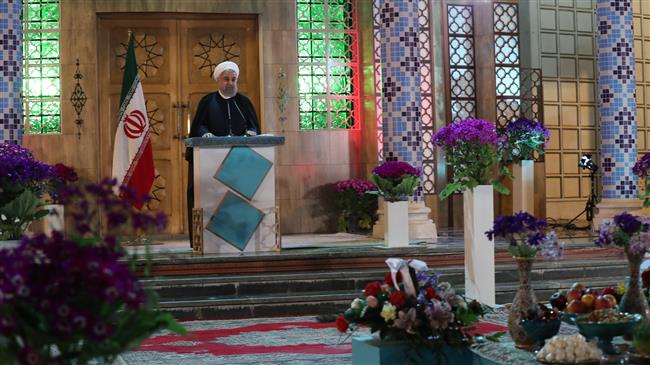 Iranian President Hassan Rouhani has praised the Islamic Republic’s role in efforts to restore peace and stability to the Middle East through cooperation with regional countries.

Rouhani made the remarks on Tuesday in a live address to the nation on the occasion of Iranian New Year.

The Iranian president made a reference to the Daesh terror group’s territorial defeat last year in Iraq and Syria, which came about with the help of Iranian military advisors.

“Last year, our nation, which has always been the creator of peace and tranquility in the region and the world, managed to bring more stability and security to the region alongside nations of Iraq, Syria and Lebanon, through its continued endeavors and the [efforts made by] its sincere soldiers and diligent diplomats.”

Rouhani praised the unity of the Iranian nation during the tragic incidents that occurred last year, including the natural disasters that hit several parts of the country.

The president reaffirmed his administration’s determination to continue its efforts to eradicate poverty and combat unemployment, calling on the people, particularly investors and entrepreneurs, to assist the government to achieve that goal.

Enemies, Rouhani added, were “after a pretext to break the Iranian nation,” but they failed to do so in the face of the people’s unity.