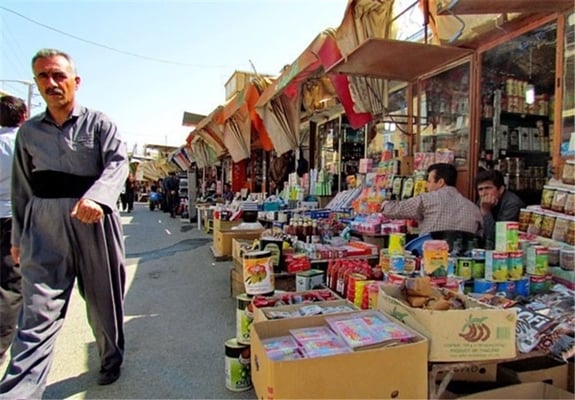 Media reports show that people of Iraq, and also other neighbours of Iran, are flocking to border markets of the Islamic Republic amid the historic devaluation of rial, turning basic commodities into rare goods for local residents.

It’s been a while that the threats and challenges against Iranian border markets, particularly in the western and southern, areas have turned into a hot topic for discussions in various circles in Iran but as things stand, no measure has been adopted so far to tackle the serious problem .

Last month, the governor of the northwestern city of Marivan in Kurdistan province warned about the negative impacts of the massive purchase of basic commodities in the city’s market by foreigners arriving in through Iraqi borders saying this has turned the commodities into rare goods for the local residents over the past months.

“About 1100 Iraqis arrive in Marivan on a daily basis through Bashmaq border to purchase high amounts of basic commodities,” Mohammad Shafi’ee was quoted as saying in a report by Aftab-E Yazd newspaper.

He described the number of Iraqis arriving in Marivan as unprecedented and warned about a looming crisis in the region.

The fall of Iran’s Rial against other currencies over the past months is cited as the main reason behind the growing visits of Iraqis to Kurdistan and Khuzestan provinces to provide their basic commodities.

“The border markets are shrinking due to the visits of the Iraqis. The Iraqis mainly from southern regions of Iraq including Basra enter Arvand, Khorramshahr and Abadan to purchase their basic commodities like meat, chicken, bread and even salt. This is mainly due to the devaluation of Iran’s Rial against Iraq’s Dinar,” he said.

This comes as an Iranian lawmaker said angrily just recently that due to the devaluation of Iran’s national currency, Iran’s local markets have turned into an appealing destination for travelers from neighboring states.

“The reality on the ground is that as our fellow countrymen in the border areas gradually lose their purchasing power due to Ria’s depreciation, the residents of the neighbouring states enjoy the privilege to buy an increasing amount of goods in return for lower money,” Majid Kianpour said.

On the other hand, Gholam-Reza Sharafi, another Iranian lawmaker from Abadan province, touched on the new challenges against the border markets.

In an interview with Aftab-e Yazd, Sharafi elaborated on the recent volatile in the markets of the border areas and said based on an undeclared law, Iranian and neighboring border residents have been involved in exchanging commodities over past years.

“In our region, the exchanges used to be carried out mainly through the Persian Gulf states but recently due to Iran’s Rial devaluation, we see that the value of Iraq’s national currency has increased ten times against our currency. This, in turn, has significantly raised the purchasing power of Iraqis and since they suffer from lack of infrastructure to produce their basic commodities, naturally they flood to Iran to provide the commodities in Iranian markets,” he noted.

In response to a question on the possible impacts of such exchanges on Iran’s economy, the lawmaker added unfortunately Iran’s free zones along the border areas have turned into an appropriate destination for neighbouring residents for their basic goods.

“It goes without saying the new situation is threatening us because our goods easily become rare for our own people. This inevitably manipulates our markets,” Sharafi noted.

He then elaborated on a mechanism to overcome the problem and said Iran needs to establish balanced economic exchanges with the neighboring states and added to this end, Iranians have to stick to the law and exert further efforts to create jobs, attract tourists and foreign investors and promote our domestic goods.

“If we violate the law, such economic chaos in the border markets becomes inevitable. For example, at present, foreigners can empty parts of our markets with just a 100-dollar bill. Therefore, a high amount of Iranian goods are taken out in return for little money,” Sharafi said.

Touching on the necessary measures to overcome the challenges, the lawmaker said it’s not too late yet and the Islamic Republic can tackle the problem by relying on economic advisories from experts.

“Sanctions are not just threats even if they are challenging. Today, we can easily bypass the sanctions through adopting precise measures and establishing good relations with the outside world. This is a good chance for us to test ourselves at the economic field and prove our abilities to the world,” he concluded.