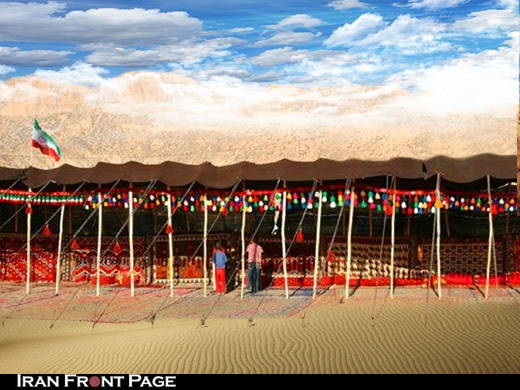 The head of the Iranian tourism agency says arrangements are being made for the settlement of thousands of foreign tourists in the so-called black tents in nomadic areas across the country.

Thousands of foreign tourists are expected to arrive in Iran and be settled in nomadic black tents as part of grand tours in 2015 and 2016. The following is the translation of a report on the tours filed by the website of the Cultural Heritage, Handicrafts and Tourism Organization:

Appearing on “Hi, Good Day” show on Jaam-e Jam [an external TV service of the Islamic Republic of Iran Broadcasting], Director of the Cultural Heritage, Handcrafts and Tourism Organization Masoud Soltanifar said that arrangements are being made for the settlement of thousands of foreign tourists in the so-called black tents in nomadic areas across the country.

Recalling the success of the 11th government in promoting tourism, he said a decade ago only five villages in the country were capable of accommodating foreign tourists, but now thanks to foreign interests in rural tourism, most villages can put up foreign tourists who can live in rural houses and see firsthand what kind of life people in the Iranian countryside lead.

He further said Muslim and Arab tourists are more interested in northern provinces of the country as well as those home to religious sites, while European tourists are fond of villages on the edge of deserts.