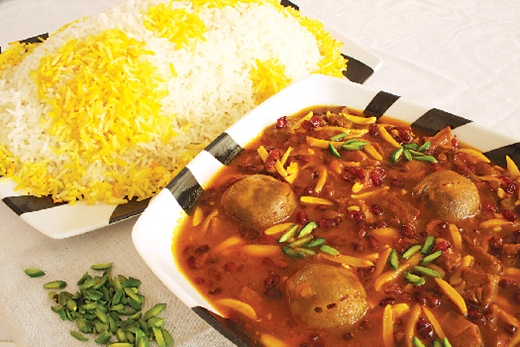 The recipe for Gheymeh, a dish that has made a name for itself as a fixture of religious functions.

Many Iranians associate the name “Gheymeh” with the votive food that is offered at mourning functions in the first ten days of Muharram which culminates in Ashura, the day Imam Hussein (PBUH) and his companions were martyred, and also on Arba’een [a Shiite Muslim religious observance that occurs 40 days after Ashura].

To give viewers a taste of what Iranian mourners are served at these religious ceremonies and others, IFP has decided to post the recipe for the dish that has made a name for itself as a permanent fixture of Muharram. In Farsi, Gheymeh means “small pieces of meat”, that’s why the meat chunks used in this classic Iranian dish are quite small. Based on how you like it though, the size of meat cubes can be bigger than the original recipe.

Some of the ingredients might be hard to source, like dried limes (Limoo Amani in Farsi), yellow split peas, and Iranian saffron and rice. It is worth noting that this dish must be served with plain steamed rice which is later garnished with saffron-covered rice. IFP hopes that you give it a try and like it.

2. One cup yellow split peas (100 grams) – you’d better pick them over and rinse them a few times, because otherwise they might have a faint unpleasant smell; it is advised that you soak them at least for half an hour. Another important thing about yellow split peas is that there might be varieties on the market that take a long time to cook. Even worse are those that get toughened as a result of cooking. So make sure you buy high-quality split peas.

3. One-two large onions which are peeled and finely chopped – if they are not thinly chopped, large strips of fried onions might be later floating in the gravy, giving it a bad look. Besides, many people prefer them invisible.

4. Three-four dried limes – they give the stew a special flavor, one of the ingredients that should not be replaced with anything else. Try to buy them from Iranian grocery stores. Some recommend replacing them with lemon juice, but if you do, a special unique taste will be missing. They should be soaked in water for a few minutes and pierced with a fork. Avoid overusing limes, because it will give a bitter taste to your stew.

6. A piece of cinnamon bark – it can be replaced with a pinch of cinnamon powder, but it is worth noting that using powder makes the stew translucent. The bark should be removed after the stew is ready.

8. One level teaspoon saffron – you will need a pestle and mortar to grind it into powder; the powder should not be prepared much in advance, because it will lose part of its aromatic smell. You had better brew it with a little hot water to have better color and aroma.

9. Three-four potatoes for French fries – the stew is garnished with fries for topping. In another variation of the same dish, it is topped with fried eggplants.

13. One teaspoon rose water – this ingredient is optional and can be excluded.

How to cook Gheymeh

1. Fry onions with vegetable oil over a medium heat until they turn soft and golden brown, add turmeric and pepper to it.

3. Add meat cubes and fry them until browned on all sides.

4. Tomato sauce should be fried with the mixture until it turns deep red; stir it frequently to prevent it from burning.

5. Add the brewed saffron to the contents of the pot and give it 2-3 minutes to work its magic.

4. Pour water into the pot to the extent that it submerges all ingredients and then keep the lid on to bring it to the boil. Afterward, turn down the heat to let it simmer.

5. Add the piece of cinnamon bark to the pot.

6. In the final one hour, the pierced dried limes can be added. They should maintain their ball-like shapes while being cooked.

7. Salt should be added toward the end of cooking to stop meat from toughening and prolonging the cooking time. If fresh meat is used, the cooking time will decrease as opposed to frozen meat. When the meat is cooked the pot can be taken off the heat. Do not forget to remove the bark. The stew should neither be watery nor too thick. If you are interested in adding rose water, you can spoon it in now.

8. Garnish the stew with fries and serve it with rice.