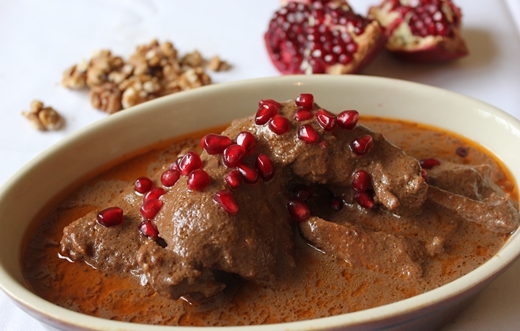 If your Iranian hosts serve Fesenjan when they have you over, you should know that you are a special guest.

Fesenjan is an Iranian dish you should not get off on the wrong foot with. Luckily, the recipe is open to change to suit different tastes. Since it can be served either as a sweet, sweet-sour or sour stew, it’s up to you to adjust its flavorings – pomegranate paste, sugar, and verjuice – and cook it as you see fit.

1. Four to six chicken pieces – You could use either chicken legs, chicken breasts or a combination of both. It is worth noting that in the north of Iran the fancy version of Fesenjan, served on festive occasions, is cooked with duck. The chicken can also be replaced with fried meat balls.

2. 250 grams ground walnuts – It is very important that you grind walnuts a couple of times to get walnut oil completely extracted later on during the cooking. Walnut is the most important ingredient of this dish and to get a final good look and taste, you should pay careful attention to the quality of it.

3. Pomegranate paste – The amount of the paste depends on your taste and the kind of paste you use. Pomegranate paste might taste sweet, sweet-sour or sour. The more you use it, the darker brown your final stew will become, so aside from being a flavoring, it plays an important role in the color of the stew. If the paste tastes sour and you like to have the stew on the sour side, you can go for two heaped tablespoons of paste.

4. One level tablespoon tomato paste –It is mostly added to enhance the color of the stew and is optional. The original recipe does not contain it.

5. Verjuice to taste –If you have a sweet tooth and don’t like sour dishes, you must exclude this ingredient. But for those who like acid taste, verjuice could be the highlight of the ingredients. The amount of verjuice you use depends on your taste and the acidity of the verjuice you are using. After adding it to the stew, let it simmer for a while and then adjust the sourness. If you add it all at once, your stew might turn sourer than you like.

6. Sugar –The amount of sugar like pomegranate paste depends on your taste. But many recipes suggest two or three tablespoons are enough.

How to cook Fesenjan

1. Place ground walnut in the pot [some prefer roasting ground walnut before starting to cook the stew to get a wonderful aroma out of it, but make sure you don’t burn it, because if you do, it will take a toll on the taste of the stew], pour some verjuice and about half a liter of cold water [water of low temperature will better get the oil out of walnut] on it and then spoon in the pomegranate paste. Give it all a good stir and bring it to the boil. Then turn down the temperature and let it simmer. A well-cooked stew usually takes about three hours to be prepared.

One of the key points in cooking Fesenjan is that it should be cooked over a very low heat. Also, from time to time, check the stew for its water content; if it has lost much of it, add some cold water to the pot. However, you do not want to add a lot of water at once, because if you do, you will face two problems. First, your final stew will turn out to be watery with a bad look. Second, oil won’t come out of walnut well. Those who want to exclude verjuice can replace it with water or simply omit it.

2. Chicken pieces can be lightly fried with onions and seasoned with salt, black pepper and turmeric in advance to be added later to the pot. But if you want to make it quick, you don’t have to fry them in advance, instead they can be simply added to other ingredients in the last one hour of the cooking along with salt, black pepper and turmeric. Basically, chicken is cooked in an hour or so. Therefore, if you find it well cooked while your stew needs more time to be prepared, you can take the chicken pieces out of the pot and put them aside. The pieces can be added to the stew in the last few minutes of the cooking.

3. When the mixture starts thickening, tomato paste can be added – in the last 30 minutes.  If you like your Fesenjan to be sweet or sweet-sour, you can add sugar in the last 15 minutes. Avoid adding it earlier so that you won’t end up having a burnt hard layer at the bottom of the pot.

4. You can place the fried eggplants in the pot in the last five minutes of the cooking or if they haven’t turned cold you can simply garnish the stew with them. Serve the stew with Iranian rice.