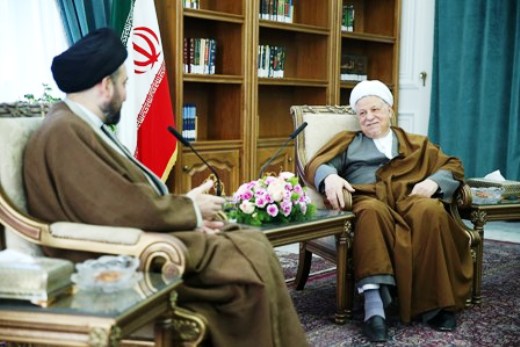 Support for the IS terrorist group by certain regional states is the result of their lack of political wisdom and foresightedness, said Hashemi Rafsanjani.

Chairman of the Expediency Council Ayatollah Akbar Hashemi Rafsanjani said on Monday that Shia and Sunni dignitaries should be watchful of civil war in Iraq.

He made the remarks in a meeting with head of the Supreme Iraqi Islamic Council, Ammar al-Hakim.

Ayatollah Rafsanjani said support for the IS terrorist group by certain regional states is the result of their lack of political wisdom and foresightedness.

‘The Shia and Sunni dignitaries should be vigilant not to allow enemies of Islam not to drag Muslims into civil war,’ warned Ayatollah Rafsanjani.

Saying that generosity and courage are two noble features of Iraqi people, as observed in Arbaeen procession this year, Ayatollah Rafsanjani said when insecurity was prevailing in every corner of Iraq, people set out, on foot, for Karbala from around the country and people in cities along the way host the majority of the guests, and drew the attention of global observers.

He said religious festivals should not be an excuse for desecration of sanctity by followers of other religions.

The Ayatollah underlined the need for unity and solidarity in the world of Islam, especially in Iraq, and said divisions strengthen such groups as IS, Boko Haram, Jibha al-Nasra, Wahabis and Salafis.

He said that even if terrorists succeed in capturing certain regions by force, they will fail to do so when people’s consent and sovereignty is to be taken into consideration because they can do nothing other than massacre of people and plunder of assets and bullying them.

As for the goals behind strengthening terrorist groups in Muslim lands, Ayatollah Rafsanjani said establishment of military bases by enemies is the sign of their program for staying long in the Muslim lands.

He lauded the important and outstanding role of the authorities and people of the Iraqi Kurdistan Region in preserving and ensuring security in the country.

Emphasizing the need for cooperation between Iran and Iraq and ample ground for expansion of cooperation, Ayatollah Rafsanjani said Tehran and Baghdad with rich natural resources, geographical condition and Ahl-ul-Bayt (AS) school of thought have the potential to cooperate with the whole world.

He then provided Ayatollah Rafsanjani with a report on the presence of some on 20 million people in Arbaeen ceremonies this year and said he had joined the public in the ceremony from Basra to Karbala and observed public love and feeling for Imam Hossein (AS) and his mourners.

Underlining political and security conditions in Iraq and unity between Shia and Sunni Muslims there he said solidarity between Muslims has prompted the enraged enemies to resort to savage acts of terror and the emergence of terrorist groups such as IS is a result of their latest attempts to that end.

He commented on conditions of Shia in the world of Islam, especially Iraq, and said Shia Muslims want Iraq for all people from all religious and ethnic groups and the past 11 years have shown that despite civil differences, Iraq believes in democracy in general.

Underscoring the need for cooperation between Kurds and Shia Muslims to ensure security in Iraq, he added our principal goal is to guarantee the territorial integrity of Iraq.