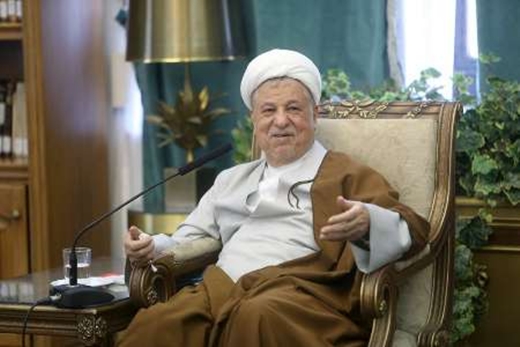 Political parties and intellectuals of the two sides should now exercise vigilance to bar hardliners to take the podium and deceive people by baseless statements, Rafsanjani said.

Chairman of the Expediency Council Ayatollah Akbar Hashemi Rafsanjani said on Sunday that the skills of Iranian diplomats removed the wrong mentality of Western states and proved Iran’s transparent and legitimate stand.

In separate meetings with local officials from different organs and Majlis representatives, he praised perseverance of the Iranian nuclear negotiators in the past 18 months.

When the Supreme Leader denounces proliferation and use of nuclear weapons, there will be no room for the Western skepticism, he said.

Calling Lausanne’s framework deal a significant outcome, he said the two sides should avoid provocative slogans which give pretexts to hardliners who seek to create obstacles for Iran and P5+1.

He expressed the hope that the world would recognize Iran’s right to nuclear program within coming three months.

In these series of talks the world put a seal of approval on the peaceful nature of Iran’s nuclear activities in the fields of agriculture, energy, health and civilian application of nuclear energy as part of the country’s legitimate rights which has roots in the patience and resistance of brave Iranian nation and their officials.

Rafsanjani appreciated the support made by the Supreme Leader of the Islamic revolution for the nuclear team and said it will take three months to clinch the final deal which is very sensitive and complicated.

Iran is determined to make use of nuclear energy to secure comfort and enhance living standards, he said.

The arbitrary international sanctions imposed on Iran were thwarted through national patience of Iranian nation, he said.

They imposed the heaviest economic sanctions against Iran but to no avail, he said, adding that they had no option except to sit at the negotiating table.

“We wish to continue nuclear activities with no limits and hope that the IAEA will carry out its duties,” he said.

Highlighting the speech delivered by US president at the US congress where he said that they had no option except to resolve the issue through talks, he said it was very logical of the two sides to express and exchange views at the negotiating table and now political parties and intellectuals of the two sides should exercise vigilance to bar hardliners to take the podium and deceive people by baseless statements.