Raeisi: US Afghan presence has led to nothing but bloodshed 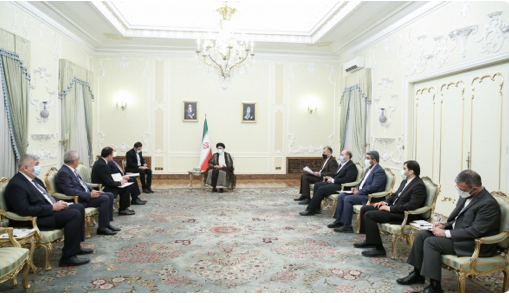 Iranian President Ebrahim Raeisi says the presence of the US in Afghanistan has led to nothing but misery, murder, bloodshed, and holding Afghanistan back. The President made the remarks in a meeting with Foreign Minister of Uzbekistan Abdulaziz Kamilov in Tehran on Tuesday night.

President.ir: The President described the relations between Iran and Uzbekistan brotherly and developing, and said, “The Islamic Republic of Iran does not see any restrictions in the development of relations with Uzbekistan in various political, economic and cultural fields.”

Speaking in a meeting with the Foreign Minister of Uzbekistan Abdulaziz Kamilov, Ayatollah Dr Seyyed Ebrahim Raisi referred to the commonalities and capacities of cooperation between Tehran and Tashkent, saying, “Iran and Uzbekistan enjoy brotherly and kinship relations”.

Referring to the two countries’ common concern about the situation in the region, especially in Afghanistan, the President said, “The result of the presence of outsiders, especially the United States, in Afghanistan is nothing but misery, murder, bloodshed and holding Afghanistan back. We must help the Afghan people taste peace and security”.

Referring to the presence of about four million Afghans in Iran and the continuation of Iran’s humanitarian aid to these suffering people, Ayatollah Raisi said, “I hope a common solution and vision will be found at the meeting of foreign ministers of Afghanistan’s neighbouring countries”.

At the same meeting, the Foreign Minister of Uzbekistan Abdulaziz Kamilov said, “The two countries have a high capacity and potential for the development of relations, and we are determined to take advantage of these capacities”.

Stating that Uzbekistan welcomes the initiative of the Islamic Republic of Iran to look into the situation in Afghanistan, he said, “Given that the superpowers could not do anything for Afghanistan, the Tehran summit is of great political importance and we fully support its results”.

Noting that the establishment of peace and stability in the region is in the interest of both countries and countries in the region, the Uzbek Foreign Minister said, “Uzbekistan seeks close cooperation with the Islamic Republic of Iran in various regional and international areas”.