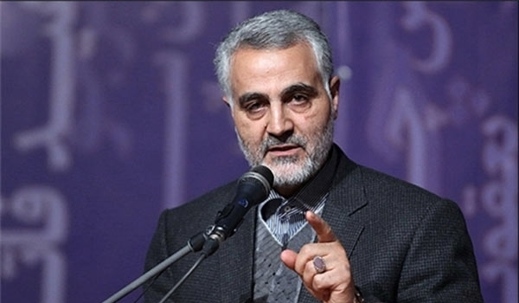 Commander of the IRGC Quds Force Major General Ghasem Soleimani has said that thanks to heavy failures ISIL and other terrorist groups have suffered in Iraq and Syria, they are nearing the end of their life.

“Given the heavy failures that ISIL and other terrorist groups in Iraq and Syria have sustained, we are sure that these groups are nearing the end of their life,” Soleimani said, addressing a ceremony on the occasion of the 36th anniversary of the victory of the Islamic Revolution in the southern province of Kerman on Wednesday.

He said that persuading and organizing the Takfiri groups to impair the face of Islam and create sedition and civil war among Muslims is the last weapon used by the arrogant powers.

In relevant remarks in October, General Soleimani underlined that the US moves in the region and the terrorist attacks by the ISIL would end in failure.

“I believe that both the US moves and the terrorist acts of the ISIL are doomed to failure because they are not in quest of truth,” General Soleimani told reporters in Tehran.

“Their solution will not lead to victory; we have all witnessed in Syria that the measures they adopted did not produce any fruit (for them),” he added.

General Soleimani underlined that the victories gained by Islam and the Islamic Republic of Iran had all been the result of their real quest of truth.

Over the last few years, Gen Soleimani’s role in Iran’s foreign affairs has become more public. These days he is the proud face of Iran, the go-to man when a crisis happens.

Iran has been providing advice and counseling to Syria and Iraq to help them in the war on terrorism.