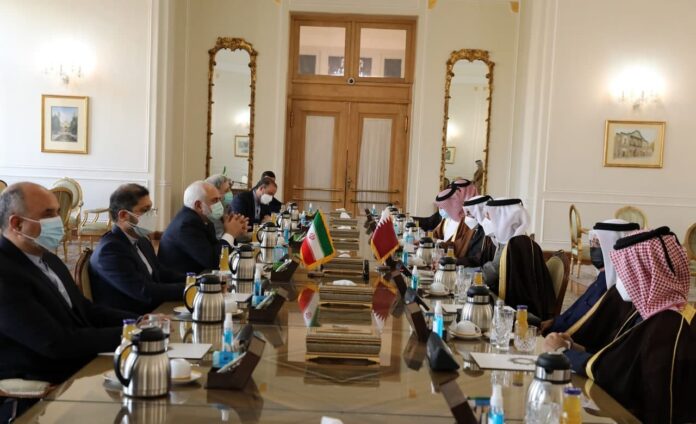 During the meeting, Zarif welcomed his Qatari counterpart and offered congratulations on Doha’s recent success in ending the blockade imposed against the Arab country.

He further highlighted the importance of bilateral relations between Tehran and Doha in the eyes of the Iranian nation and government, and expressed the Islamic Republic’s preparedness for expansion of collaborations with Qatar in different fields.

Elaborating on Iran’s principled policy of opposing the policies that are based on coercion and force in the region, Zarif emphasised the necessity for cooperation among regional countries to settle the issues and achieve a set of regional arrangements that brings about further stability, and said bilateral relations between Iran and Qatar play a key role in this path.

The Qatari foreign minister, in turn, expressed Doha’s preparedness for expansion of bilateral relations at all levels, including in the economic fields.

He appreciated all the assistance provided by the Islamic Republic of Iran at the time when Qatar was under a blockade, and said his trip to Tehran is in line with expansion of bilateral relations and within the framework of regular consultations between the two countries.

He also underlined the region’s need for a new approach and all-out collaborations, and expressed his country’s preparedness for playing an effective and pivotal role in this regard.

Sheikh Mohammed bin Abdulrahman Al-Thani finally expressed hope that the existing problems will be settled within the framework of regional initiatives as soon as possible.

Exploring the avenues for promoting economic relations and the fields of mutual cooperation were also on the agenda of talks between the Iranian and Qatari top diplomats in Tehran.

The Qatari top diplomat’s visit comes a few days before the deadline of February 21st, after which Iran has vowed to reduce the IAEA inspections if the US sanctions are not lifted.

He had announced a few days ago that Doha is ready to help de-escalate the Iran-US tension and facilitate Washington’s return to the 2015 nuclear deal between Tehran and world powers.

The Qatari diplomat has long called for a summit between leaders of the six-member Persian Gulf Cooperation Council and the Islamic Republic.

Speaking in a January interview with Bloomberg, Sheikh Mohammed bin Abdulrahman Al Thani said his government was “hopeful that this would happen and we still believe this should happen.”

“Qatar will facilitate negotiations if asked by stake holders and will support whoever is chosen to do so,” he said.

“We want the accomplishment, we want to see the deal happening,” he said of potential talks between the U.S. and Iran. “Wherever it is, whoever it is conducting this negotiation, we will support them.”