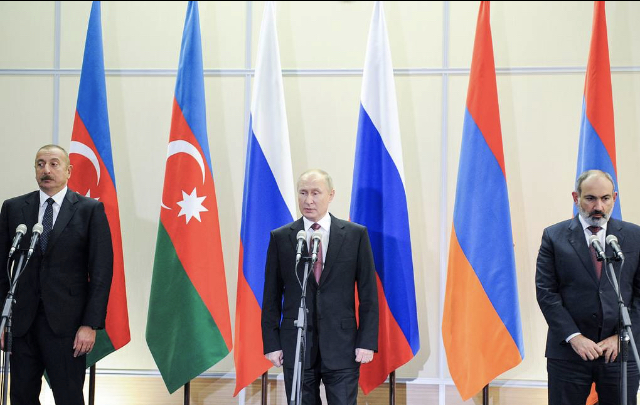 “I would like to stress that the meeting was utterly useful and timely,” he said after the trilateral talks in Sochi.

“I have a present for the Armenian and Azerbaijani friends – this is an olive branch, which symbolizes peace and prosperity. I hope very much that today’s agreements will be observed and will create conditions for further steps towards the normalization of relations in the South Caucasus,” he stated.

According to the Russian president, the three leaders issued a joint statement on the results of their joint work in Sochi.

“It tells in detail about what we did and what we agreed,” he added.

Putin, Aliyev and Pashinyan stressed that there is a need to launch specific projects to unlock the economic potential of Nagorno-Karabakh in the joint statement of leaders after talks in Sochi.

The leaders “gave a high appraisal of the activity of the trilateral working group founded in accordance with the Statement of January 11, 2001 under joint chairmanship of deputy prime ministers of the Republic of Azerbaijan, the Republic of Armenia and the Russian Federation for unlocking all economic and transport ties in the region”.

“The need for the soonest possible launch of specific projects for purposes of unlocking the economic potential of the region,” the statement reads.

Putin said he hopes the new agreements reached during his talks with Aliyev and Pashinyan will have a positive effect on the situation in Nagorno-Karabakh.

“Let us hope the agreements we reached today will develop positively and as quickly as possible,” he stated at the beginning of his bilateral meeting with the Armenian prime minister.

According to the Russian leader, the meeting was useful and timely.

“We gathered to prevent any tragic developments at the border and between the two countries and peoples in general, to go forward, move ahead. Naturally, all countries of the region, Russia, and Armenia, and Azerbaijan, are interested in it,” he stressed.

Mechanisms of the demarcation and delimitation of the Armenian-Azerbaijani border will be created before the end of this year, Putin said.

“We reached agreements on a number of issues, which are of key importance to my mind. The first one of them is the establishment of mechanisms of the demarcation and delimitation of the border between the two states – we agreed to do it before the end of this year,” he noted.

“I hope it will be done as soon as possible. There are no obstacles that may hamper the establishment of these mechanisms,” he added.