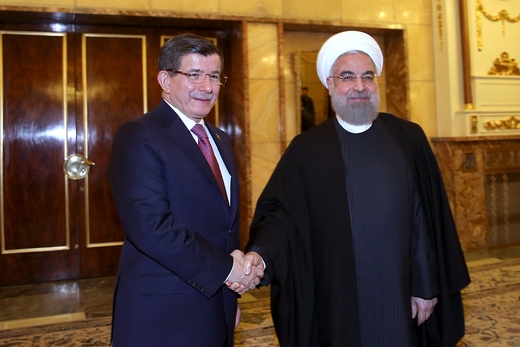 Iranian President Hassan Rouhani in a Saturday meeting with Turkish Prime Minister Ahmet Davutoglu in Tehran referred to Iran and Turkey as two important neighbors with influential roles in establishing unity and solidarity among Muslim nations, and urged enhanced cooperation between the two regional powers, particularly in restoring sustainable peace to the Middle East.

“Iran and Turkey have common objectives and interests, and should strengthen the pillars of peace and stability in the region through their cooperation and coordination and by focusing on the fight against terrorism as the common enemy,” Rouhani said at the meeting.

“Today, the establishment of Muslim unity and solidarity among Muslims is a great mission and duty on the shoulders of everyone,” the Iranian president noted.

He further pointed to the two countries as brotherly neighbors with lots of religious and cultural commonalities, saying, “Iran and Turkey, as two important neighboring countries, can take constructive and effective steps in establishing unity in the Islamic world.”

President Rouhani went on to say that the necessity for the fight against terrorism is a common danger and threat for all nations, but at the same time ruled out the interference of foreign countries, which “are not seeking to resolve regional problems fundamentally, and just pursue their own interests.”

Terrorism is the common enemy of Iran and Turkey, so both should work together to eradicate it: Rouhani

“We believe regional problems should be settled by regional countries and nations,” Rouhani stressed, reiterating that undoubtedly the cooperation between Iran and Turkey will play a constructive role in establishing sustainable peace in the region.

Iran and Turkey are on the same page when it comes to respecting the sovereignty and territorial integrity of other countries or the fact that the fate of any country should be decided by its own people, Rouhani said, adding that both Iran and Turkey agree that the bloodshed in Syria should be ceased and the displaced people should receive aid and rescue.

Iran’s President: Tehran and Ankara should take full advantage of today’s opportunity to expand their ties in line with the two countries’ interests

“Through their common views in such issues, Tehran and Ankara can work together and take serious and beneficial steps to settle regional problems step by step,” he added. 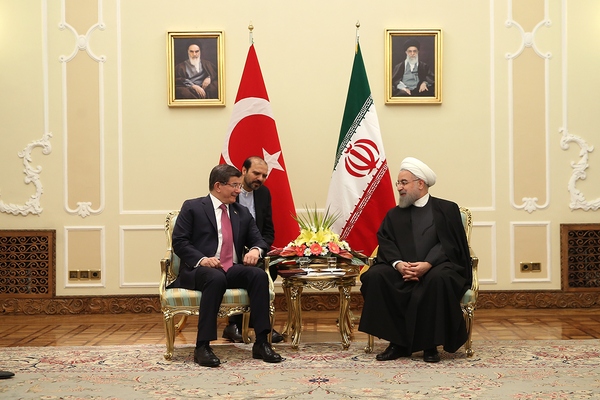 Regional Issues Have No Negative Impact on Iran-Turkey Bilateral Ties

The Iranian president further noted that certain problems in the Middle East have not at all soured the bilateral ties between Iran and Turkey, adding, “There is no barrier to the development of the two countries’ ties.”

“Tehran and Ankara have numerous capacities for increasing expansion of their ties in different sectors, particularly in transport, energy, trade, joint ventures, tourism, science, and technology, and we are ready to start mutual cooperation in all of these fields,” he asserted.

Davutoglu, for his part, expressed Ankara’s resolve to open a new chapter in its relations with Tehran, saying, “Today, Turkey is more than ever willing to enhance its brotherly cooperation with the Islamic Republic of Iran in various fields.”

President Rouhani: Iran and Turkey can take constructive and effective steps in establishing unity in the Muslim world

The Turkish PM, who arrived in Tehran on Friday night at the head of a trade delegation, noted that he has brought the largest investment sector and industrialists of Turkey to Tehran.

“Iran and Turkey complement each other, and enjoy great capacities and potentials for promotion of the level of their cooperation,” he added.

Turkey, Iran Should Join Hands in Fight against Barbaric Terrorists

Davutoglu also highlighted the need for regional cooperation between Iran and Turkey and the necessity for the fight against terrorism.

“On regional issues, we should join hands and stand against the barbaric methods of terrorist groups,” he noted, reiterating that Ankara is ready to have full cooperation with the Islamic Republic in the fight against terrorist groups in the region.

Ankara is ready to have full cooperation with Iran in the fight against terrorist groups in the Mideast: Turkish PM

He also emphasized that respecting national sovereignty and territorial integrity, adopting non-interventionist policies, and letting the country’s nation to decide for their future are the principles of Turkey’s foreign policy.