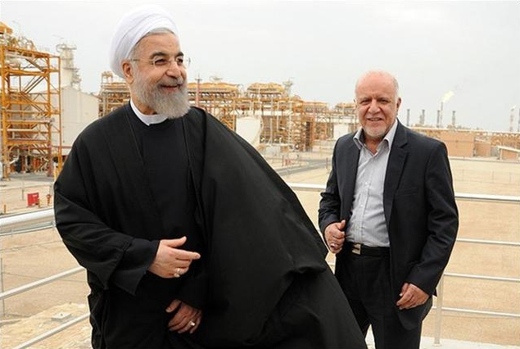 Implemented development plans of South Pars oil and gas field will be opened by President Hassan Rouhani on Monday as his government's top prioritized energy project.

The Public Relations of Pars Oil and Gas Company announced on Saturday that upon the completion of the onshore and offshore operations of the processing and desalination facilities of this national project’s 15 and 16 phases, its gas output will be injected into the national gas network in the first month of the cold season.

The project has been implemented by a consortium comprised of Iranian companies aimed at gas usage from the shared gas resources between Iran and Qatar.

The objective of the project is producing 50 million cubic meters of sweet gas daily for national consumption, especially in homes, business, industries, and 80 thousand barrels of gas condensates for refinery feedstucks, which will in turn be turned into various types of fuels, other precious products, and 400 tons of sulfur for exports.

Last winter, Phase 12 of the South Pars was officially opened by President Rouhani with a daily production of 75 million cubic meters.

After prioritizing the completion of the semi-completed phases of the South Pars Oil and Gas Field by the current government, increasing Iran’s natural gas production has been accelerating significantly.