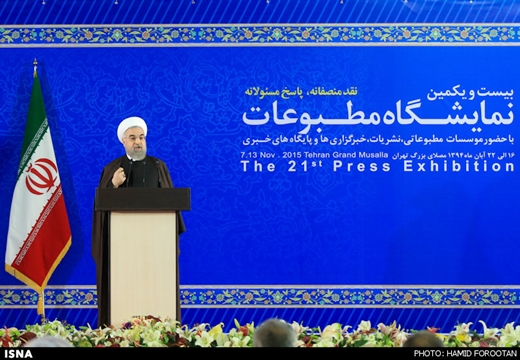 President Rouhani said with transparent regulations in place, individuals cannot use a single word or a sentence as a pretext to toy with press freedom.

In a key-note speech at the inaugural of a 21st edition of Press and News Agencies Exhibition on Sunday, President Rouhani said the country needs transparent media and regulations and that banning is the last thing one should ever do in dealing with the press.

The following is the translation of part of what else the Islamic Republic News Agency quoted the president as saying:

President Rouhani said with transparent regulations in place, individuals cannot use a single word or a sentence as a pretext to toy with press freedom, because transparent rules envision clear encouragements and punishments.

He added gone are the times when the media acted in a one-sided way. “It is a two-way street. People express their views not just on social networking sites. By buying or shunning certain publications on newsstands members of the public express their views.”

The president concluded his speech by saying that under the present circumstances, we need to instill hope in society and the press, mass media, IRIB and websites shoulder that heavy responsibility.