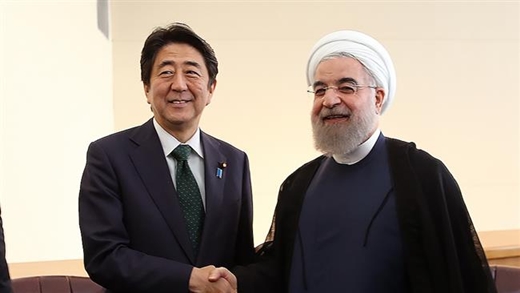 The president told the Japanese PM that the nuclear agreement is an opportunity for the expansion of relations between Tehran and Tokyo in various fields such as nuclear energy.

Iranian President Hassan Rouhani has called for the expansion of political, cultural, and scientific ties with Japan.

The president made the comments during a meeting with Japanese Prime Minister Shinzo Abe in New York on Sunday.

He said the nuclear agreement of July 14 is an opportunity for the expansion of relations between Tehran and Tokyo in various fields such as nuclear energy.

Referring to the spread of Takfiri militant groups in the Middle East, Rouhani stated that in order to eradicate terrorism, steps should be taken toward enhancing welfare and development in the region, so that the terrorists lose their foothold.

Rouhani, who is currently in New York for the 70th Session of the United Nations General Assembly, hailed Japan as a strategic partner of the Islamic Republic.

Abe, for his part, stressed that Tokyo wishes for an active role in further developing Iran’s economy.

Japan is ready to have cooperation with Iran in the fields of science, culture, environment, medicine, nuclear safety and technology, Abe said, adding that Tokyo will support deals with Japan’s private sector and the implementation of commercial agreements with Iran.

The Japanese prime minster also offered his condolences on the death of Iranian pilgrims killed in the recent deadly incident that claimed the lives of hundreds of pilgrims during the Hajj rituals in Saudi Arabia.