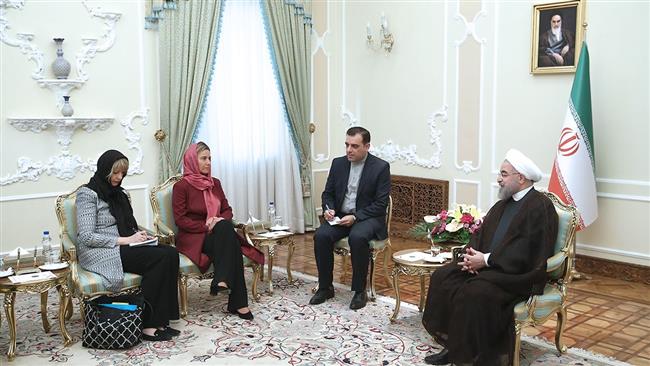 President Hassan Rouhani said once the Vienna agreement is put into effect, the next step will be campaign against terrorism and bringing to a halt war and bloodshed in the world.

President Rouhani made the remarks in a meeting with EU Foreign Policy Chief Federica Mogherini in Tehran on Tuesday evening.

President Rouhani said Iran and the EU can increase their mutual cooperation in political, cultural, technological and scientific areas after the implementation of the Vienna agreement.

‘The agreement that was struck will be very important and influential for the future of regional relations, Europe and the world,’ the Iranian president said during the meeting.

The Iranian president underlined that Iran-Group 5+1 (the US, Russia, China, France and Britain plus Germany) agreement will harm no country in the region or the world, and said, ‘Now an opportunity has been created to think less about the past and instead think of a future which can be based on mutual respect and colossal interests.’

‘One of the advantages of the Vienna agreement is cooperation to fulfill our shared obligation with regard to humanity and human ideals to fight terrorism and end war and shedding of the blood of innocent people,’ President Rouhani added.

During the meeting in the Iranian capital today, Zarif and Mogherini agreed that Iran and the EU resume a new round of high-level talks.

‘Today we decided to start a new round of talks between Iran and the European Union which we call high-level negotiations,” Zarif said in a joint press conference with Mogherini.

Zarif said the talks would begin soon at the “level of deputies” and “will gradually” move to the ministerial level, adding that the talks would cover such issues as “energy, transportation, trade, environment, human rights and the campaign against drug trafficking.

The Iranian foreign minister, meantime, pointed to the regional crises, and said, ‘The ongoing crises in the Middle East are posing a serious threat to the entire world and particularly the EU member-states.

Mogherini, for her part, said the nuclear agreement between Iran and the Group 5+1 (the US, Russia, China, France and Britain plus Germany) was a sign showing that diplomacy can succeed.

She said the nuclear breakthrough also has an ‘added value’ in that it can serve as an example for addressing other issues around the world.

‘The deal is not the end of a process, it is the beginning,’ she added.

The EU foreign policy chief arrived in Tehran for talks on implementing a recent nuclear agreement reached between Iran and six world powers in Vienna on July 14.

Mogherini, who is accompanied by her deputy Helga Schmidt, arrived in Tehran on Tuesday, from Saudi Arabia.

Mogherini was lead negotiator for the G5+1 in the long-running talks over Tehran’s nuclear program that culminated in the July 14 agreement.

According to Mogherini’s office, her visit ‘will provide an opportunity for exchanges on the implementation of the agreement.’