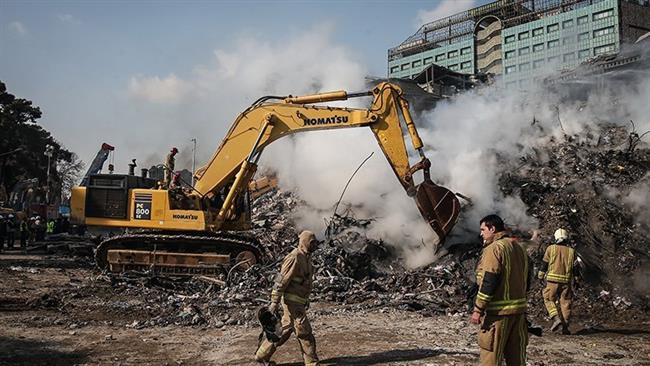 Following the collapse of an ageing high-rise in downtown Tehran last week, many Iranians have joined a campaign on social media, questioning the competency of the Tehran Mayor Mohammad Baqer Qalibaf.

The Plasco building came down after fire engulfed the top floors of the 17-story building on Thursday morning. Iranian rescuers Sunday night recovered four bodies from the rubble of the high-rise, bringing the death toll to at least seven, with more than 20 people still missing. At least 194 people were also injured in the tragic incident.

The four bodies, found in the basement of the shopping center, have been turned over to the coroner’s office for identification. The Tehran mayor had earlier said 20 firefighters lost their lives trying to contain the flames.

Rescue officials have announced that they were unlikely to find any survivors due to the extreme heat caused by fires that reignited as debris was removed.

Days after the campaign was launched against the Tehran mayor, a video was released on Sunday which showed Qalibaf warning about the poor safety standards and weak structure of the Plasco building, built some 54 years ago.

Speaking in a pre-sermon address to worshipers at the weekly Friday Prayers on January 20, Mehdi Chamran, the head of Tehran’s City Council, criticized such rumors and messages on social media and said people’s lives must not be toyed with.

He said repeated warnings were issued over the past three years about the lack of safety of the building.

Chamran also emphasized that there were other unsafe buildings like Plasco in Tehran and urged the adoption of measures to improve their safety.

Tehran deputy mayor Ahmad Sadeqi also on Sunday dismissed all claims about the municipality’s failure to carry out its obligations to secure the safety of buildings.

“In the Plasco incident, the [Tehran] municipality has not been at fault at all,” he said.

The building was one of the capital’s oldest high-rises, which housed 600 production workshops.

Material damage from the collapse is estimated to stand at IRR 15,000 billion (nearly $500 million).