People are entitled to governing their country 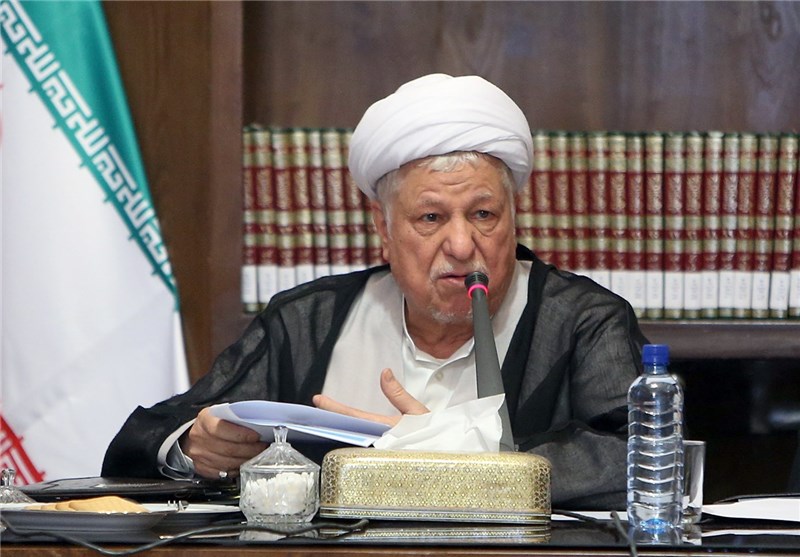 Ayatollah Rafsanjani has said that students should remain vigilant not to let infiltrators poison the atmosphere, cause differences and shatter unity in the country.

The chairman of the Expediency Council has stressed the importance of the [parliamentary and Assembly of Experts] elections in late February and the post-JCPOA conditions and said that wise and popular statements should be made at this juncture.

Ayatollah Akbar Hashemi Rafsanjani made the remark in a meeting with members of the Central Council of the Islamic Association of Students at the University of Tehran and Tehran University of Medical Sciences on Monday and added that people who are entitled to governing should learn about their rights and take part in the elections.

Tasnim News Agency on December 14 published Ayatollah Rafsanjani’s remarks and the following is the translation of what the top councilor said:

The Expediency Council chairman said that university students are the valuable assets of today and tomorrow in the country. “Failure to meet the rightful demands of university students does no good to any establishment, because these students build the future and they should not face ambiguities in dealing with different issues.”

He further said that some [hardliners] are not happy with people’s tendency toward moderate ideas which are the essence of Shiism and have their roots in the pure Islamic faith.

Naturally, when political pressures surrounding a social phenomenon are removed, there will be some reactions before things reach a point of balance,said Rafsanjani.

As for the university atmosphere in the eleventh government and the Student Day ceremony [on December 7], he said that the relatively successful ceremony is another example of the determination of vigilant people in society, especially university students and the educated people, to create yet another epic in defending the Islamic establishment and the ideals of the late Imam and the martyrs.

The top councilor then recalled the decision by Seyyed Hassan Khomeini [the grandson of the late Imam] to run for the Assembly of Experts and the reactions his decision has drawn and said that the candidacy of a person like him is the basic right every ordinary citizen, let alone a member of the family of the late Imam, but that he is not treated fairly.

Ayatollah Rafsanjani then recalled the controversy over Seyyed Mahmoud Doaei and his Ettela’at daily’s republication of an interview with former President Mohammad Khatami and said that Doaei has a long record of struggles [against the Pahlavi regime], cultural experiences in the pre-revolution struggles and accompanying the late Imam during his years in exile.

“In 1966, we released a statement against the coronation ceremony. Mr. Doaei and I were betrayed. I landed in jail and he escaped to Iraq where he – aided by Mr. Mostafa Khomeini – joined Radio Baghdad and became the sole speaker at The Clerical Movement in Iran, an influential program.”

Rafsanjani highlighted Doaei’s strong interest in the late Imam, the revolution and the Islamic establishment and said that unfair treatment of a person who has spent a lifetime – before and after the Islamic Revolution – serving the establishment is nothing but an anger which has no rational, legal and farsighted basis. “We are concerned, because the consequences of such misbehaviors will by no means serve the establishment’s interests.”

The Expediency Council chairman said that extremism is doomed to fail, adding that rebellion by ISIS and a coalition of the world’s opposing powers against the terror group shows that terrorism and extremist acts are condemned as horrible in all divine faiths and human schools of thought.

“Even those who are known in the world for their radical policies and support for racist regimes have come to the conclusion that they had better join the anti-ISIS coalition or they have been forced to do so, because they know that the world public opinion is against terrorism and the massacre of humans.”

He said that people who are entitled to running their country should know their rights, adding that they are expected to participate in the elections because the turnout is of great importance.

People showed a similar behavior in the 2013 presidential elections and achieved a [good] result, Rafsanjani said, adding that the moderates seek trans-factional cooperation in their governance, and they are after an approach which serves the interests of the revolution, establishment, country and people.

Rafsanjani advised students to exercise patience and said, “If we try for God’s sake, He will not abandon those who fight in His path. Perhaps we have to go through tough tests to prove that honesty works.”

He referred to different developments that unfolded before and after the victory of the Islamic Revolution and said some individuals who claim to be popular have – knowingly and unknowingly – tried to create a chasm between people and the establishment.

The top councilor said that the enemy’s infiltrators are trying to poison the secure atmosphere in the country, cause differences among people and shatter unity in the country, adding that students should remain vigilant not to let them achieve their objectives.