Party politics: A party for women or partisans of women’s political activity? 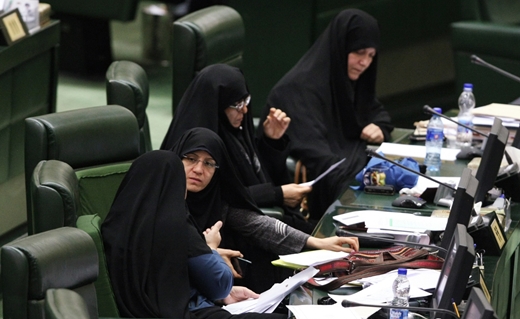 Three female political players set out reasons why Iranian women are underrepresented in executive bodies and how the current trend can be reversed.

Partisan activities are one of the main indicators of development in democratic societies. Parties can serve as a yardstick to measure the development of a country’s political structure. Like men, women which make up half of the country’s population have to be active in partisan politics before seeking to have a share in the administration of the country’s affairs. A look at women’s presence in active political parties in Iran shows that their role in partisan activities is meager.

Sharq daily on September 14 published remarks by three active Iranian women in a sit-down which focused on the reasons behind women’s not-so-active involvement in partisan work and the effective ways to talk women into participating in political activities.

Azar Mansouri, a member of the Union of Islamic Iran People Party [a reformist party], Masoumeh Rezaei, a political director at Zeynab Society [a principlist group] and Soheila Jelodarzadeh, a member of the Worker House [reformist] and a member of the Association of the Women of the Islamic Republic criticized the lack of self-belief in women and poor performance of parties and said that women’s involvement in political affairs should not be highlighted simply in the run-up to election.

They also stressed the need for a rise in the number of women MPs in the Islamic Consultative Assembly and said that higher female representation in parliament and formation of independent all-women parties can greatly contribute to female participation in different tiers of party management. The following is a brief translation of what they said in the round-table:

Rezaei: Women who lack self-belief depend on men. Women’s parties are not flourishing in our country. […] Women are asking for a share in executive posts, the Assembly of Experts and the Expediency Council, but they remain dependent on men’s parties when decisions are made on the indicators and numbers [of women in those chambers]. The ticket women approve of is the one men offer with a few women on the list.

Rezaei: […] Presently the principlist and reformist parties do not have enough dynamism to pursue partisan agenda and women’s rights which have been envisioned in the Constitution. […] Women have reached [political] maturity, but in practice they fail to act properly because of their dependence.

Mansouri: […] Politics is a masculine realm in our country and women have not been given enough opportunity to prove themselves. If you compare parties in Iran with those in developed nations which have democratic processes, you will see a void. […] No party in Iran has dedicated a defined place for women in leadership posts and the secretaries general of all recognized parties are selected from among the ranks of men. The parties’ inattention to women’s issues is the very reason why we need parties to be [specifically] formed for women. […]

Jelodarzadeh: We should not talk in a dreamy world. We should consider the realities on the ground. […] If parties are part of the democratic structure, they should take on a real form and be given the opportunity to conduct their activities. […]

Now in the post-sanctions era, we should not repeat the past mistakes; rather, we should set the stage for partisan activities. An intraparty challenge will help women find their rightful place in top tiers of the country’s leadership without forming women’s parties.

Jelodarzadeh: Women can form an alliance to overcome the challenges. Women’s political alliance helped set the stage for naming a female minister. Women can tap into this tactic in the upcoming elections too. The fate of a nation is what matters. Development would be a nonstarter in the absence of women. […]

Women are not doing enough

Mansouri: … The countries which succeeded in increasing women’s political participation have either changed their electoral law or encouraged parties to put women on their tickets. […] The late Imam stressed the need for women’s participation in the administration of the country’s affairs and the Supreme Leader has said that women should try to win half of parliament’s seats. We need to tap into the potential of parties, or the country’s electoral structure should allow for it.

Jelodarzadeh: […] We need to adopt a single strategy with the women’s society. I mean those who pay a huge price in dealing with their problems thanks to the lack of women’s presence in decision making processes in the country, those women who face difficulties for their education, career, and child rearing [among other things]. Women have to become united and work toward their goals. […]

Mansouri: There are three viewpoints in this regard. The first argues women should take care of kitchen issues, not politics. The second one says the electoral law has not banned women’s running for elections. This one is dominant in our society, but we have yet to change the way executive officials and political players behave. The third contends women’s political participation will not materialize, because they are treated as second-class citizens. We need to create opportunities and tap into mechanisms to help women enter political activities. […]

Rezaei: Women should become mature enough to think that they need to join hands, work beyond factional lines and have strong determination [to get active in political affairs]. […]

Jelodarzadeh: We need to have a coalition for women across the nation. Women also need a concentrated leadership regardless of their leanings: principlist or reformist. Women need to work on their common goals.

Mansouri: The question of women’s participation comes to the fore before any election with parties highlighting it, but it is consigned into oblivion after elections. This is used as a tool to bring women to balloting stations, but after the vote women are denied any share and nothing positive happens for them. […]

Mansouri: We need to take into account the quantity [the number of women who are active in political arena, parliament for instance]. […] Time has come for political movements to take more risks and help a larger number of women find their way into parliament. […]

Women’s presence in parliament opens up opportunities for political parties. If their presence is bolstered, we can remain hopeful about the future. We can even be optimistic about women’s presence in presidential elections in the not-too-distant future.