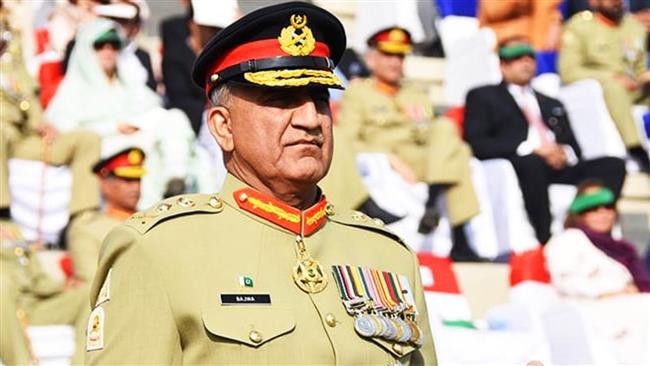 Pakistan’s Chief of Army Staff General Qamar Javed Bajwa has arrived in Tehran at the head of a delegation of ranking military officials for talks with his Iranian counterpart and other officials.

Bajwa’s plane touched down in the Iranian capital on Sunday. He has traveled to the Islamic Republic at the invitation of Chairman of the Chiefs of Staff of the Iranian Armed Forces Major General Mohammad Baqeri.

The two sides are to address enhancement of the level of defense and security interaction, as well as provision of security on the common border and other issues of common interest.

Iranian Foreign Minister Mohammad Javad Zarif traveled to Pakistan in May and the countries agreed to increase cooperation towards boosting security in their border areas by setting up a joint security committee.

The visit at the head of a high-ranking political, military, law enforcement, and security delegation came a month after 10 Iranian border guards were killed and two others injured in an ambush near the town of Mirjaveh in the southeastern Iranian province of Sistan and Baluchestan.