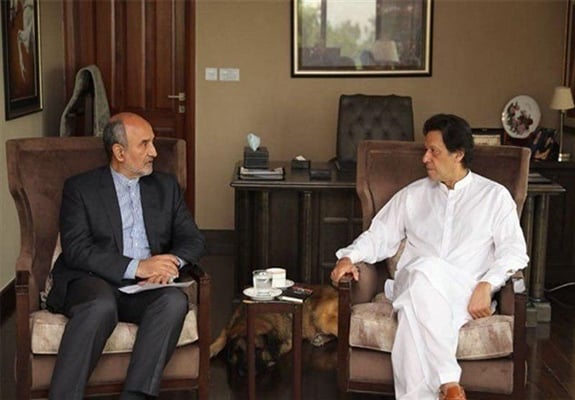 Pakistan’s prime minister-in-waiting Imran Khan says he is quite interested in travelling to Iran after swearing in, stressing his desire for closer political and economic partnership with Tehran.

“I’m eager to visit Iran and see this country’s beautiful historic sites,” he said in a Saturday meeting with Iran’s ambassador to Pakistan Mehdi Honardoost who conveyed President Hassan Rouhani’s message to Imran Khan on his electoral success in the parliamentary elections.

Imran Khan, the leader of PTI party, thanked the Iranian ambassador for the congratulatory message and described Iran as a trustworthy friend of Pakistan, Tasnim News Agency reported.

“We seek to create friendly and brotherly relations will all neighbouring countries, particularly Iran,” he said.

Imran Khan said his government will spare no chance to boost Pakistan’s economy, hence it will work towards promoting trade with Iran.

Ready to Mediate between Tehran and Riyadh

Imran Khan said Pakistan is ready to play a constructive role to mend fences between Iran and Saudi Arabia.

Tehran and Riyadh have been at loggerheads in recent years over a long list of differences, particularly their conflicting view on conflicts in Yemen and Syria, among others.