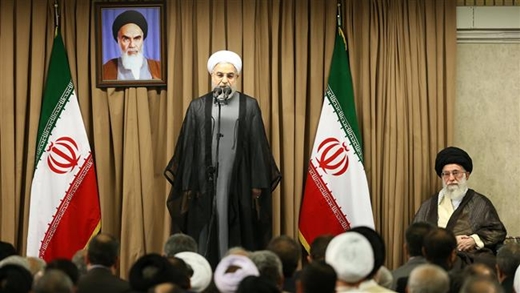 The president added that Iran’s foreign policy is based on constructive interaction with other countries while maintaining national independence and dignity as the country’s red lines.

Iran’s President Hassan Rouhani says a comprehensive nuclear deal with the P5+1 group of countries is possible if the six world powers do not put forward excessive demands.

“If the opposite [negotiating] side makes no excessive demands, the deal will be attainable,” Rouhani said during a meeting hosted by Leader of the Islamic Revolution Ayatollah Seyyed Ali Khamenei in Tehran on Tuesday.

Parliament Speaker Ali Larijani and Judiciary Chief Ayatollah Sadegh Amoli Larijani as well as other senior officials were on hand for the meeting.

The president added that Iran’s foreign policy is based on constructive interaction with other countries while maintaining national independence and dignity as the country’s red lines.

He said the settlement of the nuclear issue within the framework of safeguarding the country’s nuclear rights is among the Iranian administration’s priorities.

The Iranian nation’s resistance against ill-wishers’ pressure and failure of sanctions against Tehran have brought powerful countries to the negotiating table with Iran, the Iranian president added.

Rouhani emphasized that the bans have failed to yield the results expected by the West, and noted that the Iranian nation is capable of solving its social, economic, political and cultural issues even when sanctions are imposed on the country.

Despite sanctions, Iran has succeeded in bringing down inflation and increasing the investment rate in cooperation with the nation, he stated.