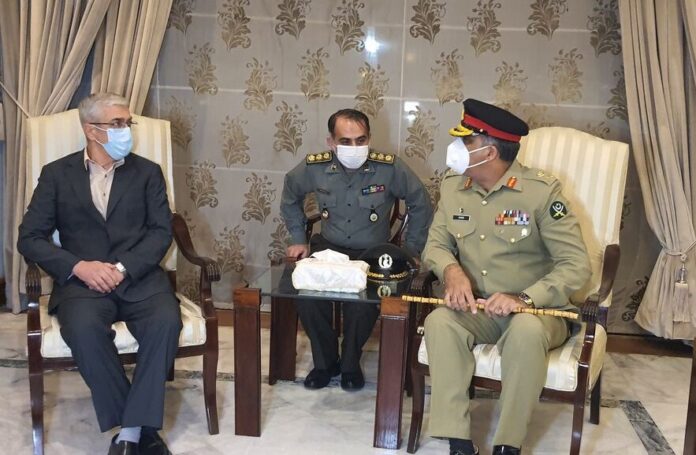 The Chief of Staff of the Armed Forces of Iran is visiting Pakistan on an invitation from the country’s military chief, for high-level security talks.

According to Nour News, a news outlet close to Iran’s Supreme Council of National Security, the visit highlights the will of Iran and Pakistan for the expansion of their political, economic, security and defense ties.

The report also sees the visit as Iran’s push for regional security through cooperation with its neighbors.

“Existence of over 900 kilometers of common borders between the two countries and activities of some terrorist groups and smugglers to undermine the security of joint borders are key elements for expansion and strengthening of defense diplomacy between the two sides,” Nour News says.

This is also seen as a basis for closer economic cooperation including on the Peace Pipeline and border terminals.

The report says the irresponsible withdrawal of the US and its allies from Afghanistan also calls for security and military work among Afghanistan’s neighbors.

Accordingly, such cooperation is necessary amid attacks by Daesh and other terrorist groups, including the recent one on a mosque in the northern Afghan city of Kunduz, and Washington’s exploitation of the political vacuum in Afghanistan to drag the country into a civil war.

Nour News says seeking help from the US is not an alternative, citing comments by Pakistani Prime Minister Imran Khan who said cooperation with Washington only intensified his country’s security and political crises.

The outlet also points to the opportunity created by the withdrawal of the US and NATO from Afghanistan. Their pullout, it says, helps regional countries enhance cooperation toward lasting security to prevent the return of foreigners to the region. The report calls for greater defense and security cooperation on Afghanistan among Iran, Russia, China, countries of Central Asia and Caucasus along with India.

Baqeri’s visit is seen as part of Iran’s strategy of regional cooperation for regional security, even as the Islamic Republic showed its determination to fight security threats by the recent military drill in its northwest, its air defense drills and its strikes against anti-Iran groups in Iraq’s Kurdistan region.