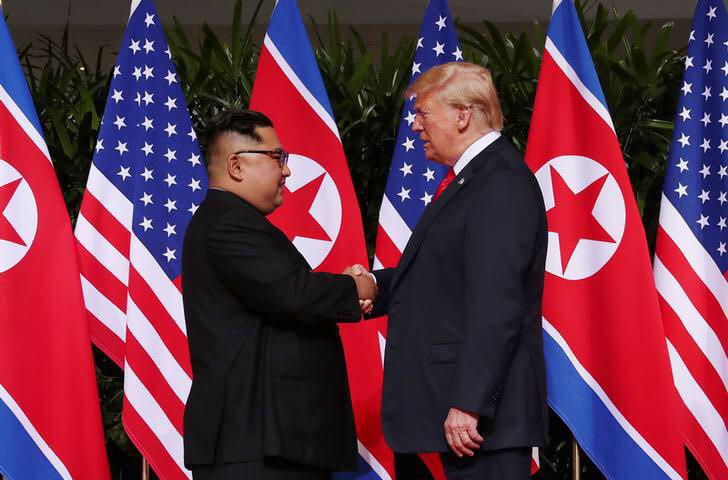 North Korea’s Supreme Leader Kim Jong-un has pledged his "firm and unwavering commitment to the complete denuclearisation of the Korean peninsula" following a historic meeting with US President Donald Trump.

The US, in turn, “committed to provide security guarantees” to North Korea following a “comprehensive, in-depth and sincere exchange of opinions” with Kim, according to a document signed by both leaders.

Following the historic meeting, Trump announced that denuclearisation on the Korean Peninsula would begin “very quickly.”

In a televised ceremony held in Singapore, the two leaders signed a joint statement that Trump called “comprehensive.” In the statement, Trump “committed to provide security guarantees” to North Korea, and Kim “reaffirmed his firm and unwavering commitment to complete denuclearisation of the Korean Peninsula.”

But the statement was short on details, and it was not clear if the two leaders had signed another document laying out potential next steps or a timetable. The joint statement was not immediately released to reporters, but it was legible in a photo of Trump holding it up at the ceremony.

The statement said the two nations would hold “follow-on negotiations” led by Secretary of State Mike Pompeo and a high-level North Korean official “at the earliest possible date, to implement the outcomes” of the summit meeting.

It also said the two nations would “join their efforts to build a lasting and stable peace regime” on the divided peninsula, meaning talks to reduce military tensions that could eventually lead to a formal peace treaty to end the Korean War.

“We had a historic meeting and decided to leave the past behind,” Kim said at the signing ceremony, adding that “the world will see a major change.”

“We’re very proud of what took place today,” Trump said. “I think our whole relationship with North Korea and the Korean Peninsula is going to be a very much different situation than it has in the past.” He said that copies of the document would be distributed and that he would speak to reporters later about it.

The signing ceremony came after several hours of discussions between the two leaders.